New Delhi, Nov 16 (IANS): Prime Minister Narendra Modi on Wednesday met his UK counterpart Rishi Sunak on the sidelines of the G20 summit in Bali, where the two leaders expressed satisfaction at the state of the wide-ranging India-UK Comprehensive Strategic Partnership and progress on the Roadmap 2030 for Future Relations.

"The two leaders appreciated the importance of working together in bilateral and multilateral forums including G20 and the Commonwealth," a statement issued by the Prime Minister's Office said. 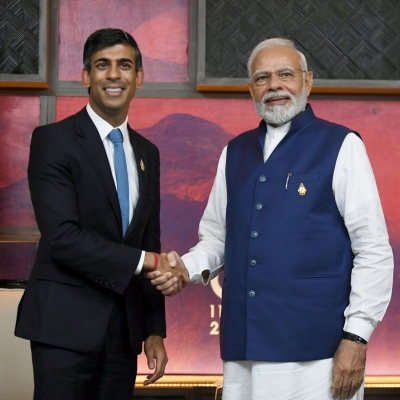 This was the first meeting between the two leaders since Sunak assumed office last month.

The discussions between the two leaders touched upon important sectors of collaboration such as trade, mobility, defence and security.

Earlier on Wednesday, Sunak had cleared 3,000 visas for young professionals from India to work in the UK every year.

"India is the first visa-national country to benefit from such a scheme, highlighting the strength of the UK-India Migration and Mobility Partnership agreed last year," a statement issued by the UK Prime Minister's Office had said.