Udupi, Jan 22: A stone inscription which has a very rare pictorial carving on it has been found in Bannanje here. It is said that this belongs to the era of Vijayanagara empire.

According to locals, this stone inscription was called Nirpugallu. The stone inscription is one and a half feet wide and four feet tall. On the right side there is an engraving of the moon and on the left side that of the Sun and a Shivling in the middle.

At the bottom of the stone inscription, a man carrying a sword and shield is seen. The soldier-like figure has a slanted face lifted up and its left leg is raised. Below, there is a pedestal. 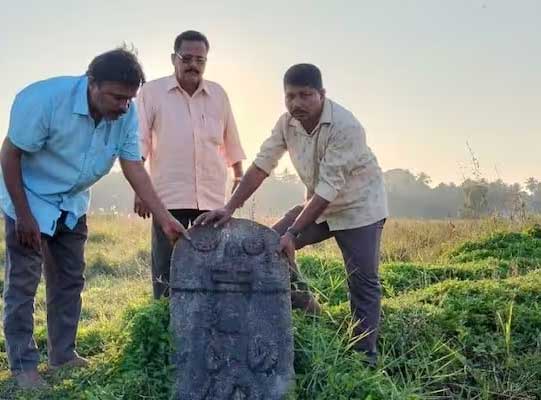 The people of North Karnataka origin are living by the side of the stone inscription. They thought that the carving on the stone is that of Lord Hanuman and have been offering pooja to it daily.

The locals say that when the whole of Moodanidamboor was flooded, the top of the stone inscription could be seen from a long distance.

When inquired with the elders of Moodanidamboor, they say that when Daiva used to go for a stroll, there was a tradition of keeping Dondi (fire made by lighting leaves of coconut tree) at the stone inscription, offer pooja and proceed further.

A guide in Manipal says that the land where the inscription is found was a paddy field. During olden days, when the harvest was good, people used to keep paddy crops on it and offer pooja.

This inscription which was buried in the earth has now surfaced. If it is fully excavated, experts can throw more light on it.