A total of 39 eminent Aloysians have been honoured since the inception of the award, including Dr N Vinaya Hegde, Justice Santosh Hegde, Padma Bhushan K K Venu Gopal – the Solicitor General of India, and Padma Bhushan K V Kamath who was the chairman of BRICS Bank. The government of India has recently appointed him as the chairperson of the National Bank for Financing Infrastructure and Development (NaBFID). 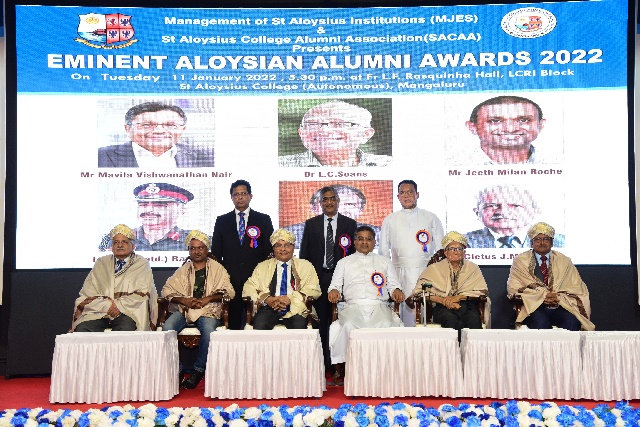 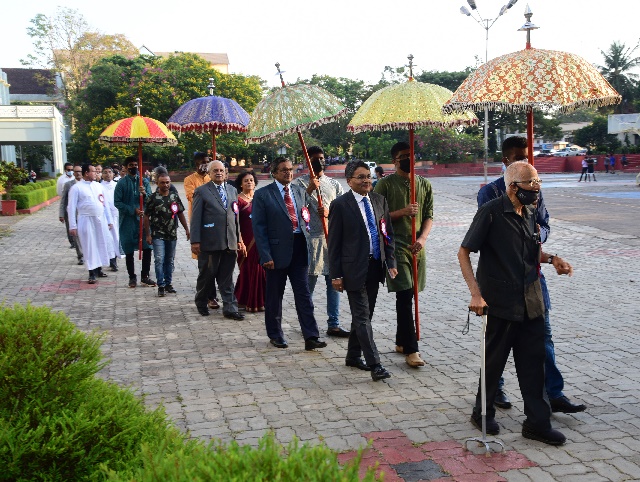 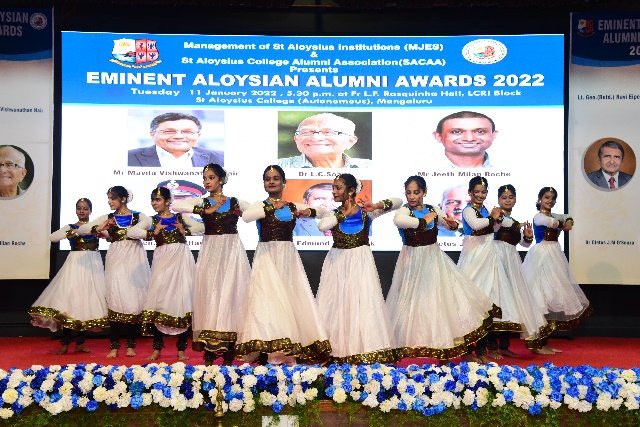 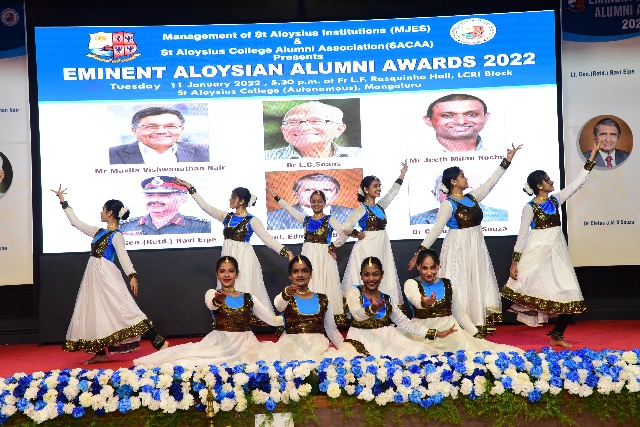 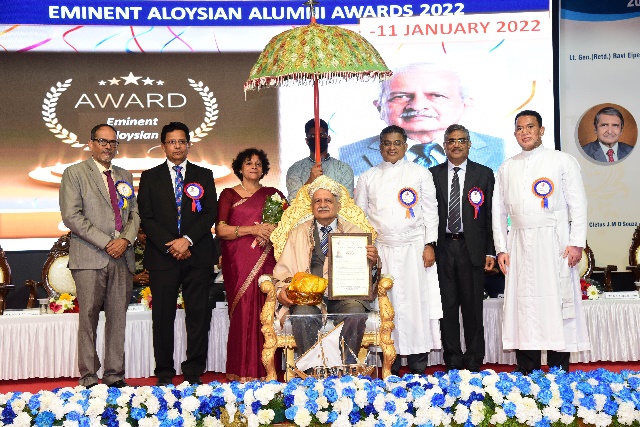 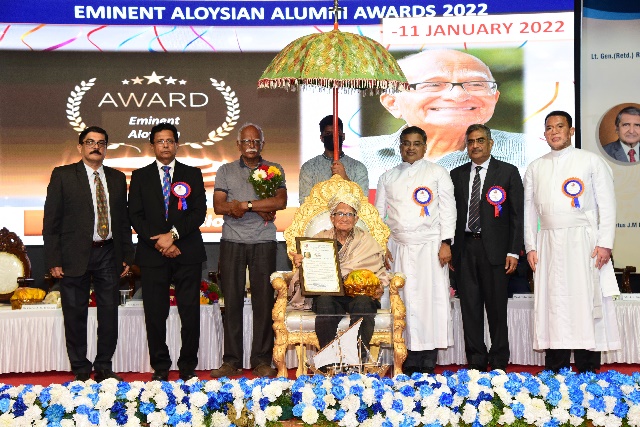 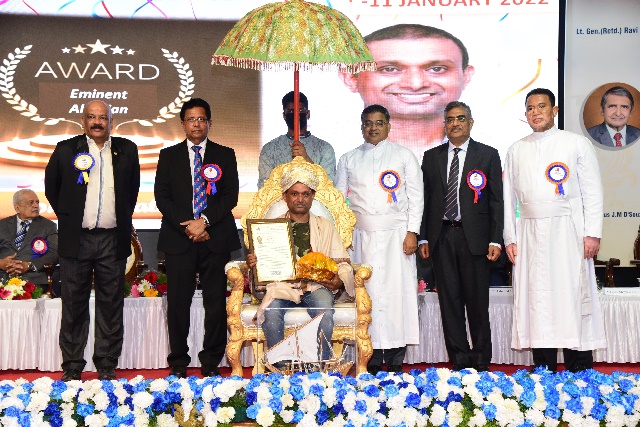 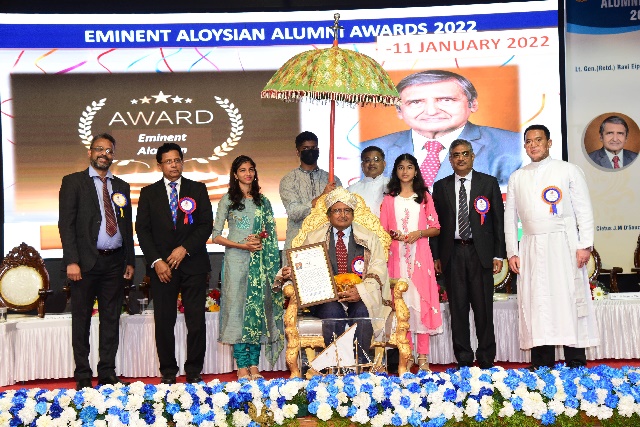 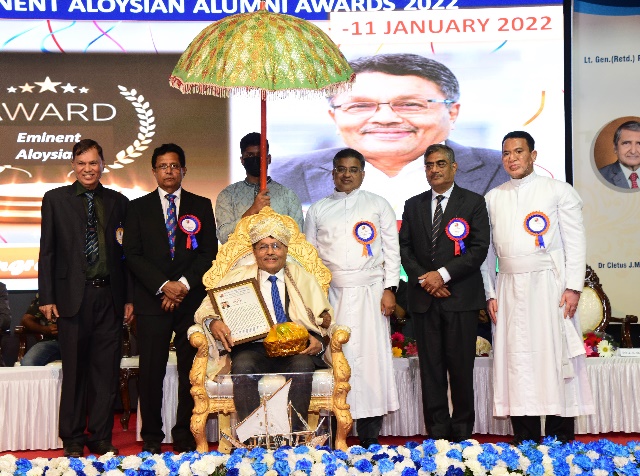 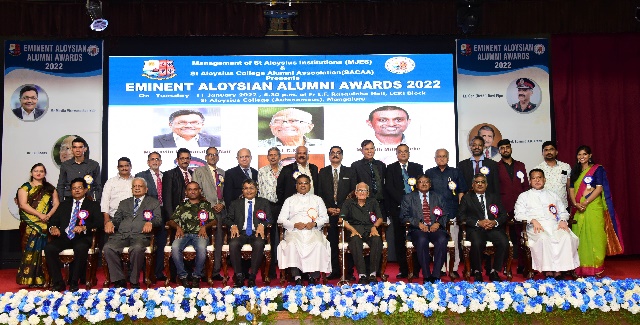 The award programme was initiated by Fr Denzil Lobo, the then principal and later rector of the college in the year 2008- and since then SACAA has been honouring the greatest achievers of this Institution. An organising committee comprised of the rector, heads of St Aloysius Institutions, and SACAA office bearers oversee and direct the award programme.

Archibald Menezes, the convener of the programme welcomed the gathering and also gave a brief description of the awards and its origin. "The programme was planned to be held in the year 2020, but owing to Covid constraints, it was repeatedly postponed, and today, after a long wait, we are all here to celebrate the accomplishments of these illustrious Aloysians," he remarked.

The honouring ceremony began after the welcoming remarks. A shawl, peta, fruit basket, memento, and citation plaque were handed to the six achievers (one of whom participated the programme online). Lt Gen Ravi Eipe, who joined the programme digitally, was honoured by Fr Melwin J Pinto SJ, rector and patron of SACAA. He thanked Lt Gen Ravi and presented him with the award digitally. "Generations of students who have passed through the portals of this great institution have immensely contributed to all spheres of life, thus facilitation a social, economic, and spiritual transformation at the national as well as global level," said Fr Dr Praveen Martis SJ in his felicitation address.

C G Pinto, Jayaram Bhat, Marjorie Texera, and CA Chandramohan K Y were on the award selection committee. Archibald Menezes congratulated and praised the jury members for their work. Out of the four, C G Pinto was present at the programme, he was presented with a memento and a bouquet.

"It's crucial to remember that half the war may be fought in the head if you're facing a challenge." Even if you are ill, you must maintain a pleasant attitude. Nair said, "A mental attitude may bring a lot of change in your life." J S Stephen Pinto, president of SACAA, gave the vote of thanks. He thanked all of the guests on the dais for attending, as well as the NCC students, student council, SACAA executive committee members, college staff, and the organising committee for their support. Reena Monteiro, head of the English department, St Aloysius PU College compered the programme. The ceremony ended with the national anthem, followed by a sumptuous meal.

Following were the recipients of the ‘Eminent Aloysian Alumni Awards’:

• Mavila Vishwanathan Nair is the non-executive chairman of the Trans Union CIBIL, India's largest credit bureau and also the non- executive chairman of KFINTECH Pvt Ltd, a leading registrar and transfer agent.
• Dr L C Soans is a renowned practitioner of organic farming in Moodbidri. He is also a recipient of Karnataka Rajyotsava Award -2016
• Jeeth Milan Roche is an accomplished entrepreneur and renowned environmentalist. He is the founder of Mangalore Green Brigade and has been on a mission to make Mangaluru a green city.
• Lt General (Rtd) Ravi Eipe fought in the 1962 China war at battle of Namkachu as a 22 year old captain. He took part in ‘Operation Pawan’ in Sri Lanka for which he was awarded ‘Ati Vishist Seva Medal’ in 1989 and was awarded ‘Param Vishist Seva Medal’ in 1997.
• Prof Edmund J B Frank has donned various managerial positions of some of the top notch business organizations. He lives the true vision and mission of the college, being a person for and with others involving in several philanthropic and charity ventures.
• Dr Cletus J M D'Souza is a renowned professor of Biochemistry known for his erudition and superior research credentials. He has established himself as one of the most sought after mentor and research guide in the field of Biochemistry.