Madikeri, May 11: Every citizen of Karnataka is aware of the plight that was faced by the people of Kodagu district in 2018 during the flood and landslide during monsoon. It is really a state of apathy that hundreds of people out of the thousands who fell on streets after their houses and properties were damaged, have still not been provided a decent house to stay in.

The then chief minister H D Kumaraswamy had promised to provide a roof over the head of families who lost their entire livelihood, property during the landslide. Even the work to build 1,040 houses also started. 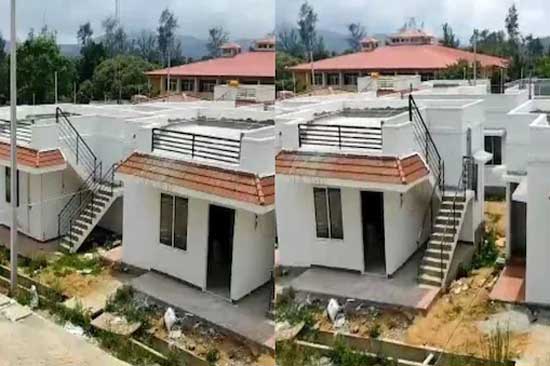 Earlier in-charge minister V Somanna had promised to handover the houses by January 2022. However, the work on these houses is still pending. Electricity supply is not provided for more than 70 houses that are built on the outskirts of Madikeri near RTO office. Even the plumbing work has just begun and it may take at least one month to complete the same.

None of the bathrooms of houses have doors. Not a single house is painted. Taking all this into consideration, it seems the victims will not get the houses even till the end of 2022. If the assistant commissioner (AC) is questioned he says that all works are done and the houses will be handed over soon.

AC Dr Yathish Ullal says, “Many beneficiaries asked us to provide financial assistance to build houses themselves. Some who had claimed money have returned and demand them to provide houses. These issues have also caused some delay.”

More than a year is passed after issuing door numbers to the victims of flood. However, the houses are not in sight. They are facing hardship as the money they earn through hard labour is not enough to pay the rent itself.