Bengaluru, May 19 (IANS): Veteran BJP leader and former Union minister S.M. Krishna has shot off a letter to Karnataka Chief Minister Basavaraj Bommai warning him of recent developments due to incessant rains affecting the brand and image of Bengaluru city.

The copious pre-Monsoon rains in the state especially in Bengaluru have affected the normal life of the people. The havoc caused by rains in Bengaluru, which is known as one of the most developing cities of the world, has caused concern, he said. 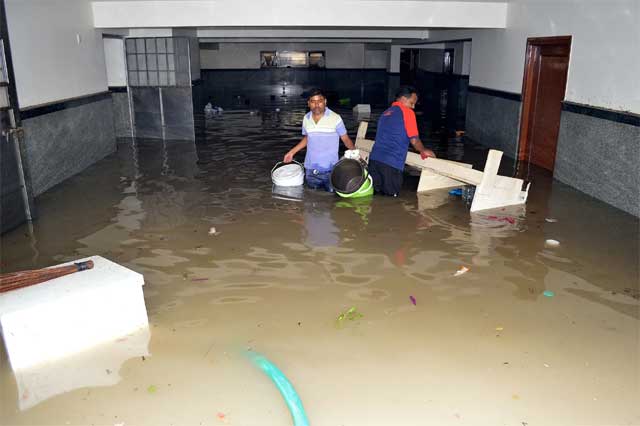 Krishna, who also served as the Chief Minister of the state during Congress rule, has feared that this development would affect the brand Bengaluru at the global level. These developments convey a wrong message to investors who want to come here and it will adversely affect the establishment of industries in the state, he said.

He also raised concern that the industrialists who want to come to the state may opt for other states and it would adversely affect the development of the state.

"During my tenure as the Chief Minister, due to the prioritisation given to the Information Technology sector, Bengaluru city developed on par with California City which is known as the Silicon Valley of America and generated employment for lakhs of youth. Following this, Bengaluru city extended its boundaries by four times. The revenue has also been increased significantly which accounts for half of the state budget," he explained.

He listed out programmes to be implemented to retain the brand of Bengaluru at the global level. The suggestions included reformation of the Bengaluru Agenda Task Force Committee, which was started exclusively for the development of Bengaluru city; inviting experts from across the sectors and preparing a blueprint for the city keeping future in mind.

This includes development of storm water drainage system in Bengaluru; formation of a team of expert officers for development of new localities that have been joined to Bruhat Bengaluru Mahanagara Palike; taking up work before the Monsoon rains on war footing, reducing pressure on Bengaluru by developing Mysuru, Tumakuru and Hubballi cities industrial infrastructure.

Krishna has stated that CM Bommai should take up the measures in consultation with party leaders to ensure suitable action in the interest of the future of Bengaluru city.