Bantwal, May 27: A Ganapati Havana conducted on the reopening day of the Padibagilu government school near Vittal in the taluk has courted controversy.

The president of the school development committee was subjected to an investigation by the block education officer and a report was sent to DDPI.

The tradition of Ganapati Havana has been followed in the school for the past 15 years. Accordingly, this year too, the Havana was held on May 6. There was no instruction from the education department that Hindu religious ceremonies should not be held in school. Similarly, the parents and students also did not object. However, the education department received a complaint and it subjected the school development committee president Balakrishna Karanth to an intense interrogation. 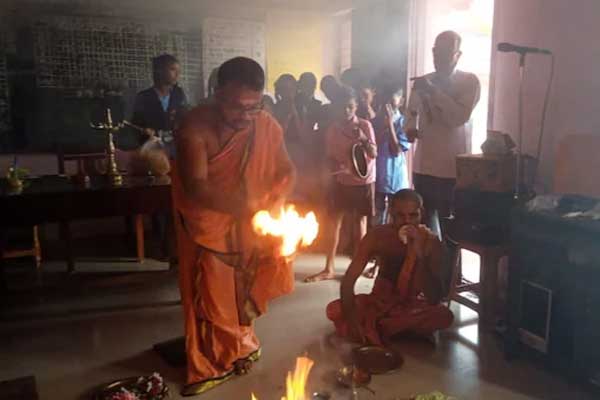 The school development committee and parents of students have vehemently opposed the step taken by the education department. Villagers say that people of all communities live in harmony in this village. This tradition has been followed in the school for many years and no one has objected to the same but the educational department is unnecessarily creating controversy out of this matter, say the villagers. In addition, bhajans are held in school every Thursday and all students take part in that.

Reacting to the incident DK DDPI Sudhakar said, “We have to follow the orders of the state government as well as the court. Schools should practice equality and there should not be any kind of religious affinity. The Bantwal BEO has informed that he has sought explanation on the matter.”

Following these developments, the president of school development committee Balakrishna Karanth tendered resignation to his position for holding an inquiry against him for conducting Havana in school.