Udupi, Oct 1: Udupi is known as the temple town and there are a number of natural tourist destinations, which have become a boon thus enriching the beauty of the district. People flock to this town from far and near to enjoy their vacations.

During the Navaratri festival, a majority of the people prefer to visit their hometowns. There are many Durga temples in Udupi district. Sri Durga Adishakti temple in Doddanagudde is one such holy and a divine shrine with a history of many years, but the temple was renovated in 2007. Devotees believe that this place is witness to many miracles and here the Goddess Durga is the most powerful and one who fulfils all the devotees’ wishes. 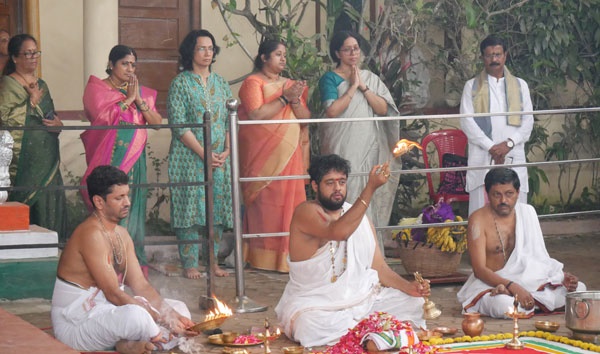 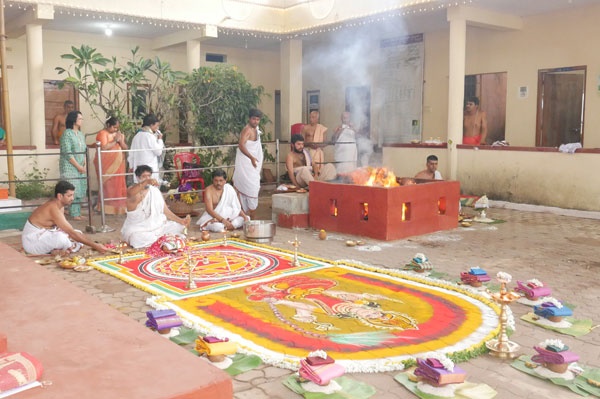 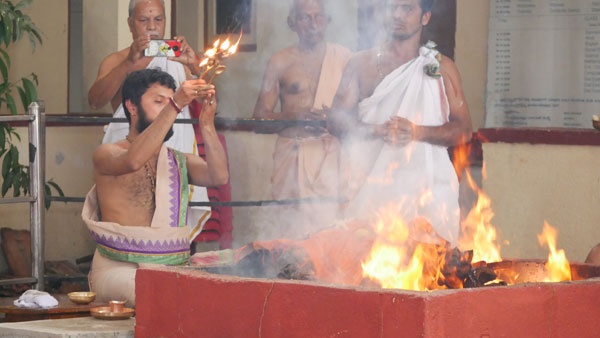 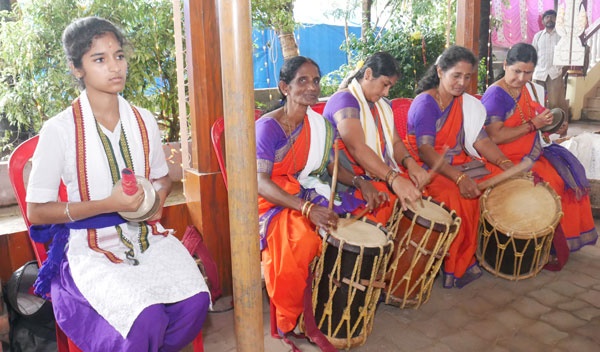 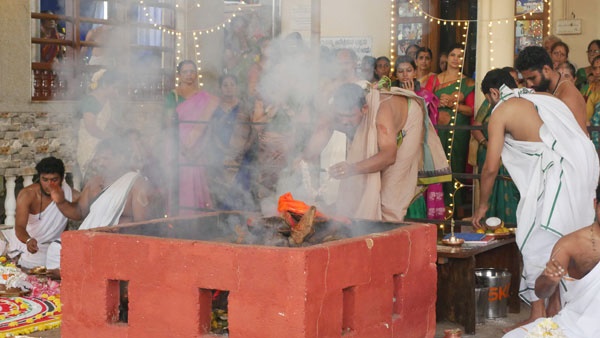 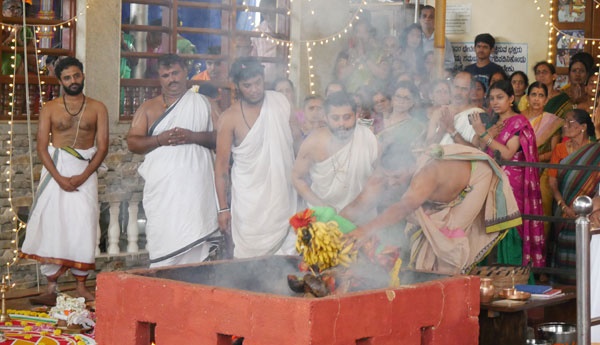 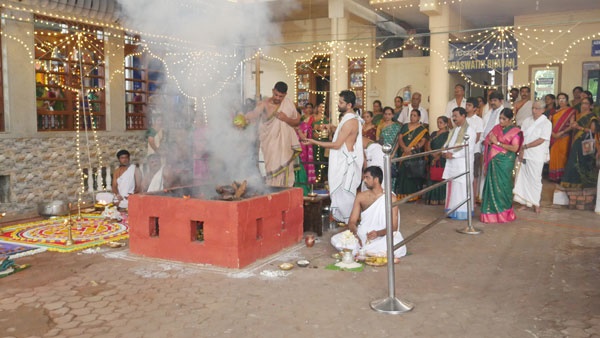 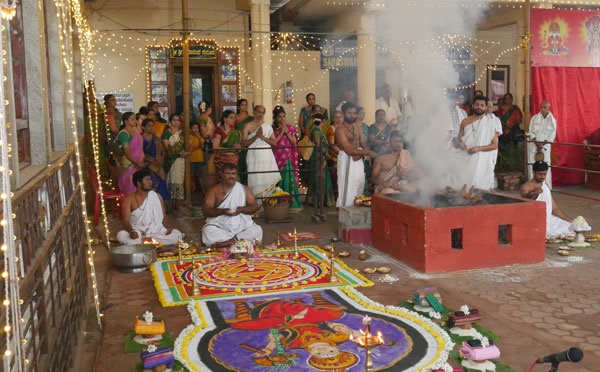 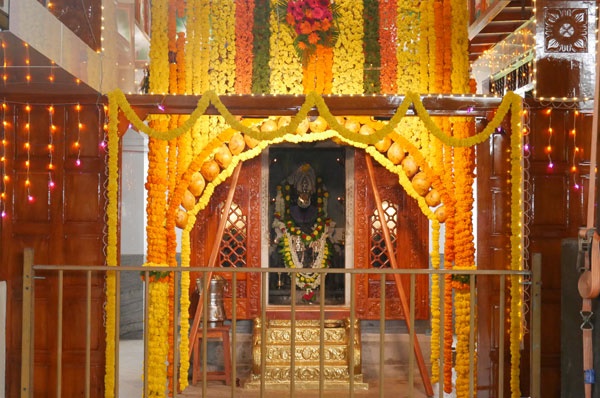 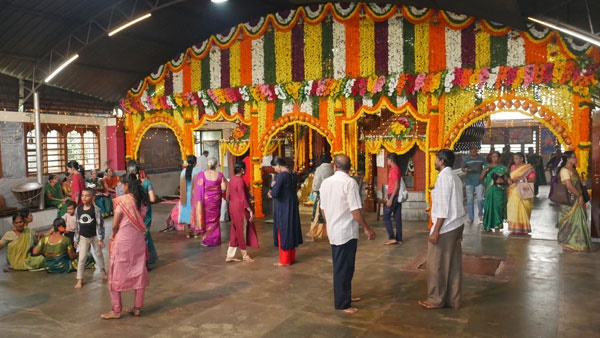 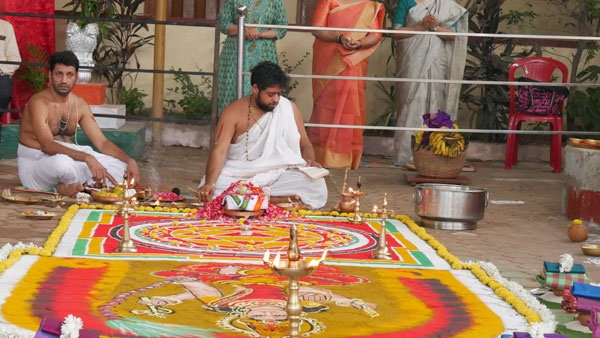 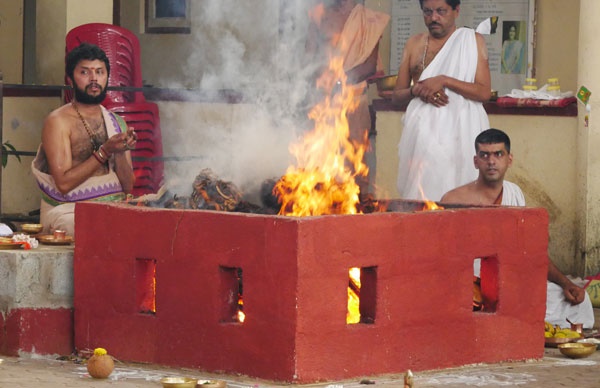 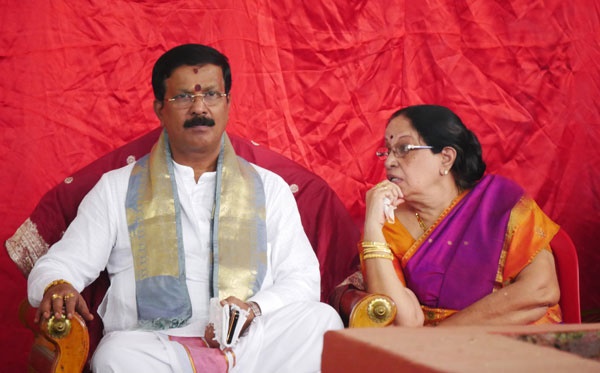 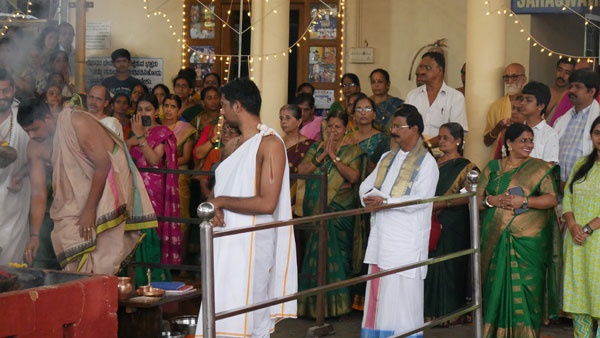 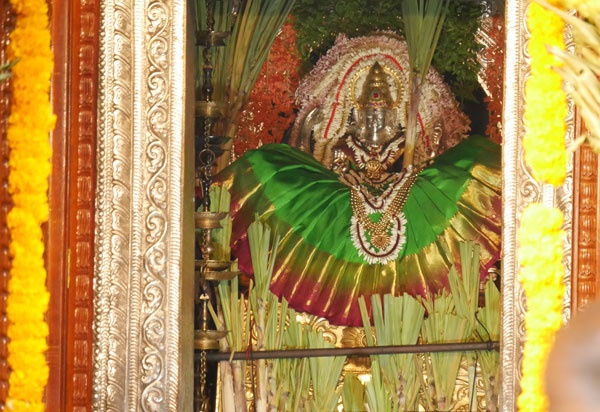 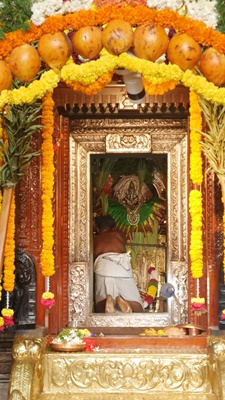 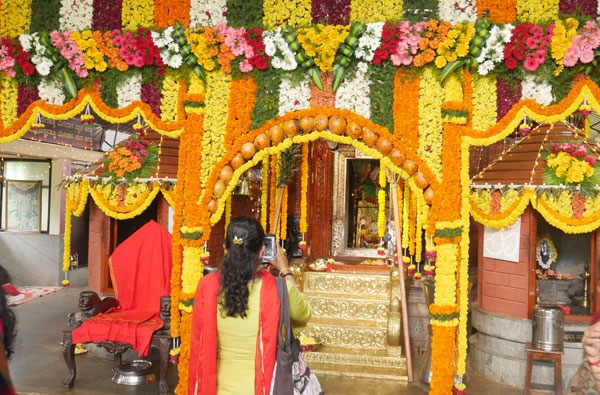 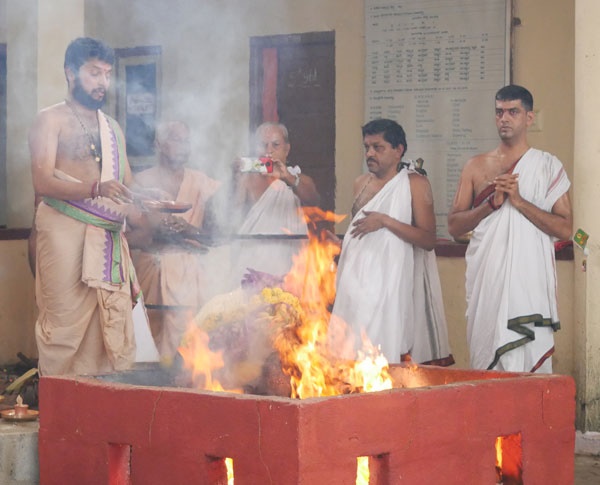 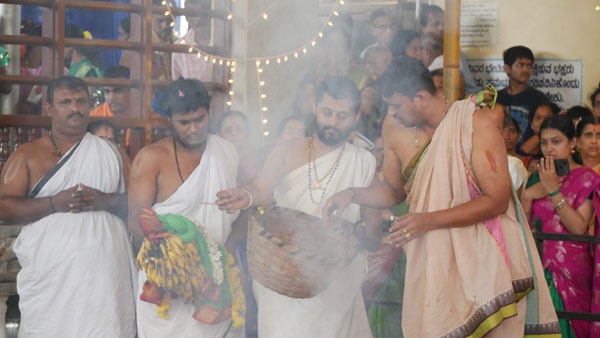 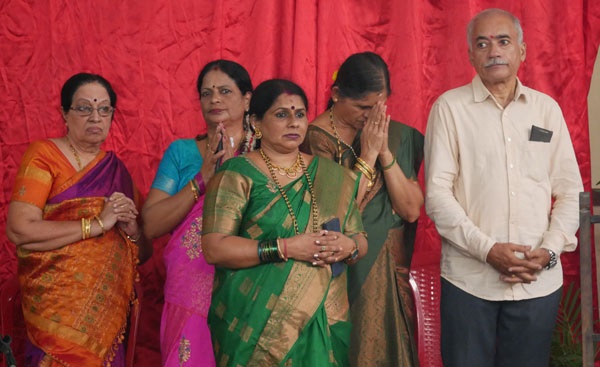 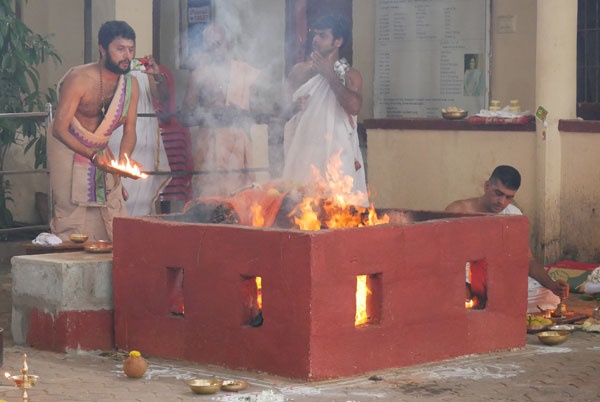 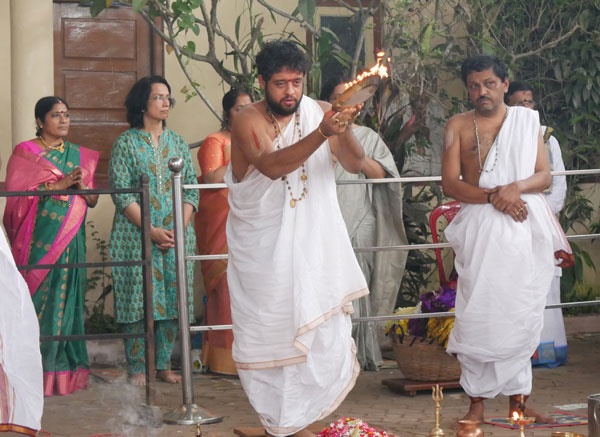 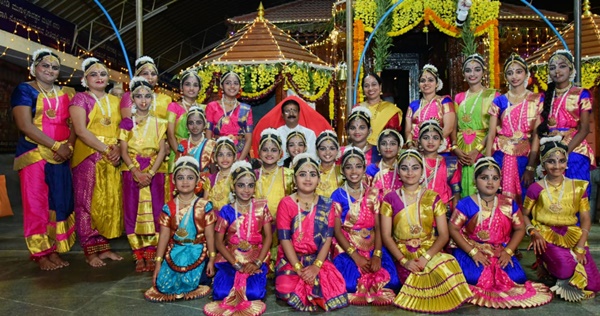 The history of the holy place is captivating. Coming to the background of the temple, earlier there was bare land. Sri Ramananda Guruji bought this 2 acres plot to build a school to facilitate affordable education for children from different backgrounds.

The current administrative members, Balasubrahmanya Rao, Kusuma Nagaraj, and Usha Ramanand joined hands in this venture and the foundation stone was laid for building Prajna International School in 2004 in the plain land of Doddanagudde. However, the construction of the school did not proceed as expected but several supernatural incidents occurred that showed signs of an upcoming temple at Doddanagudde. In one of the incidents, a security guard of the construction site woke up to the sound of a knock at the door in the night. He saw a goddess at the door whom he described as the one in a white saree with golden border, wearing lots of jewellery riding on a lion. She told him that the place belonged to her and a temple must be built for her before school is built. The security guard, who was shocked and scared at the sight, informed Kusuma Nagaraj the next morning. Kusuma Nagaraj did not believe his story and told him not to spread such irrelevant news which might have been his hallucination.

The same evening Kusuma Nagaraj saw the same goddess in her dream that burnt her arm. This incident compelled Sri Ramananda, Usha Ramanand, Kusuma Nagaraj, and Balasubrahmanya Rao to seek advice from astrologers regarding the same which confirmed the presence of Goddess Adishakti. The foundation stone for a Shree Durga Adishakti temple was laid in the year 2006 and re-established in 2007.

Adishakti is the main Goddess here and not only that, other deities installed inside the temple are placed in separate shrines. They are Lord Prasanna Ganapathi, Sri Mukhyaprana, Sri Balasubrahmanya, Yaksheshwari and Yakshakannike and Kala Bhairava. Outside this Nagalaya, other deities such as Kalkuda-Kalurti and Koropol who guard this Nagalaya are also placed. Another interesting thing is that Natyarani gets first priority after the Adishakti here.

Nruthya seve is a unique seva performed in front of Shri Durga Adi Shakthi Devi by the devotees. This year more than 148 artists performed in front of the goddess, which is a record in the history of the temple. People believe that this is a small service to goddess to get the grace of her.

Navaratri ritual began with Rakshognadhi Pooja on September 25 and will conclude with Maha Samprokshane on October 6.

Kubera Lakshmi Sahasra homa was held on September 26 and on the auspicious day of Lalitha panchami, lalitha Sahasra Kadaliyaga was held on Friday, September 30.

Aksharabhyasa seve for kids and Thulabhara seve will be held on Sunday, October 2.

Sri Mahakali Mahalakshmi Mahasaraswati Maha chandikayaga will be held on October 5. Anna santharpana seve is conducted every day for the devotees by the temple.

There were thousands of devotees visiting the temple to seek the blessings of Goddess Durga every day during the week.