New Delhi, Oct 2 (IANS): The chairman of the competition committee of All India Football Federation (AIFF), Anilkumar Prabhakaran on Sunday said that the football governing body's main aim is to encourage more participation at all levels.

"We firmly believe, Santosh Trophy's glory days should be brought back, so that it gets more and more eyeballs and takes the Senior Men's National Football Championship to a different level altogether. At the very outset, let us take the case of Hero Santosh Trophy, the NFC for senior men," said Anilkumar. 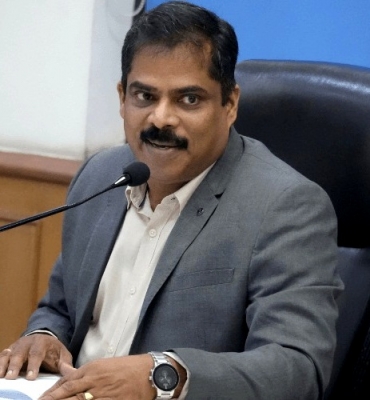 Recently, the Competition Committee met in New Delhi and made several recommendations to make National Football Championships (NFCs) across all age groups more vibrant and productive ones. Once the meeting was over, Anilkumar elaborated on how these recommendations will help to encourage more participation and take Indian football forward.

"We have recommended that the legacy competition will now be played on a zonal basis. The Final Round of the competition will have a total of 12 teams (10 qualifying states, along with the Services and the Railways). In the Zonal stage, the states will be divided into seven groups of five to six teams each. The seven group toppers and two best second-placed teams, along with the hosts will qualify for the Final Rounds."

The Competition Committee Chairman said he had other plans in mind as well. "In the past, there was an Under-21 Championship (M Dutta Ray Trophy) was there, which was stopped in between. Now we have proposed that it needs to be restarted immediately.

"We want to bring youth level NFCs into the system that will give an additional opportunity to the youngsters to showcase their skills to the Hero ISL and Hero I-league clubs, and also gives the clubs the scouting opportunity from players across India. The aim is to create a platform where players get to play many more matches than what they get in NFCs all age groups," he said.

Anilkumar said his committee has recommended that more qualified coaches with either B or A Licences should be in charge of the state teams in NFCs in future. He pointed out that his committee has made strong recommendations for improving the facilities for the players playing in NFCs.

"Our ultimate aim is to create an atmosphere to take the game forward. We are trying in both directions. The club level leagues are going on one side and without disturbing them, we are creating a platform for players not part of the league to get a chance to show their calibre and find the required ladder to reach the top," said Anilkumar.