Mangaluru, Oct 14: “Research, innovation is the need of the hour for India becoming Atmanirbar. It is time to turn from Education to Innovation, it is possible with inter disciplinary research ” said Dr Ravi Rao S, principal, Karnataka Ayurvedic Medical College, Mangaluru. addressed the delegates in the inaugural function and lighted the lamp at the National Seminar on Research Methodology and Biostatistics organised by Srinivas College of Pharmacy Mangaluru in association with Rajiv Gandhi University of Health Sciences, Bengaluru and Indian Pharmaceutical Association, DK District Local Branch, Mangaluru on October 13 and gave a talk on 'Challenges and opportunities in Drug Research'.

Dr A R Shabaraya principal and director, Srinivas College of Pharmacy and president, IPA, DK District Local Branch in his presidential remarks called upon the young researchers to develop three Cs like competency, commitment and communication to face the challenges in research. 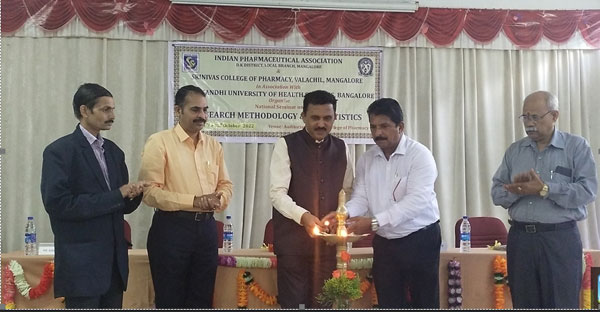