Earlier govts were buying peace, we are establishing peace in Valley: J&K L-G

New Delhi, Nov 13 (IANS): Jammu and Kashmir Lieutenant Governor Manoj Sinha said on Saturday that Pakistan is still exporting terrorism into the Valley as an attempt to create fear and destabilise peace.

"People of the Valley are playing a crucial role in maintaining peace and harmony in the region, and recently 8,000 people also carried out a rally. We are moving towards prosperity with the end of terrorism," said Sinha, while addressing the 'Chanakya Dialogues' organised by the Chanakya Forum, a Delhi-based think-tank, at the India International Centre (IIC) here. 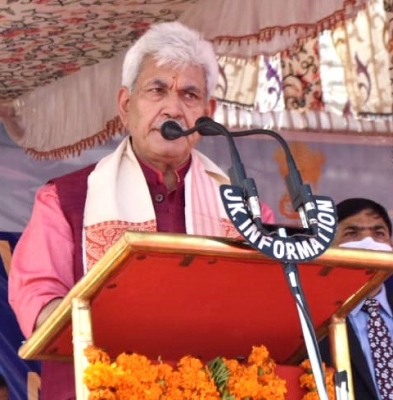 Sinha said that the earlier governments used to buy peace, while the present government is establishing peace in the Valley.

"In the e-governance category, Jammu and Kashmir is in No. 1 position among all the UTs. Since Independence, the Valley received private investments of Rs 14,000 crore only. But now the UT has received investment proposals worth Rs 56,000 crore in just about a year's time," said Sinha.

"When I became the L-G, Congress leader Digvijaya Singh called and asked me to help a man clear his bills, which were pending in some government office. When I inquired, I came to know that the work was allotted without any tender and there was a need for change," Sinha said.

He added that the present administration has changed the functioning stlye of the government and now no projects are awarded without floating tendors.

Talking about peace in the Valley, Sinha said, "We are taking action against those found disrupting peace. We have found several such people and action has been initiated against them," Sinha said.