New Delhi, Nov 17 (IANS): Former Chief Minister of Madhya Pradesh and senior Congress leader Kamal Nath is embroiled in a controversy as the Bharatiya Janata Party (BJP) has sharply criticised him for cutting a temple-shaped cake on his birthday, accusing him of insulting the sentiments of crores of Hindus in the country. 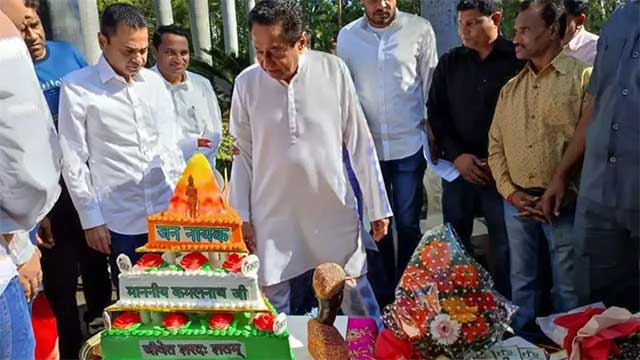 On Thursday, BJP IT cell head Amit Malviya shared the video of Nath cutting the cake and tweeted ,"Former MP CM and senior Congress leader Kamalnath, runs a knife through a four tiered, temple shaped cake, with a saffron flag and image of Lord Hanuman on top. During elections he had claimed to be Hanuman bhakt and is now insulting crores of Hindus by denigrating their deity…."

On Wednesday, Madhya Pradesh Chief Minister Shivraj Singh Chouhan attacked Nath and the Congress for cutting such a cake and termed it as an insult to the Hindu religion and Sanatan tradition.

Chouhan, in a tweet said that Congress workers had no devotion to God.

He added that the party also opposed the construction of Ram Mandir and that society would not accept this insult.