New Delhi, Nov 17: All eyes are on India as it assumed the one-year presidency of the G20 group amid shifting geopolitical dynamics and rising global challenges. The government started preparations for this a year ago.

Behind the high pitched passing on of the baton of the G20 presidency, a batch of more than 120 newly recruited Indian Economic Service officers has been meticulously working on various researches and reports for better understanding of each issue. 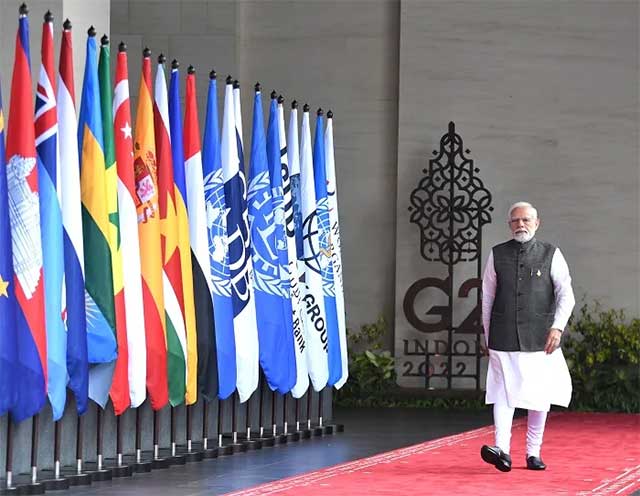 The new batch of trained young officers, instead of being placed in different departments and ministries, have been given the collective assignment for two years for preparation of the G20 meetings and presidency.

Prime Minister Narendra Modi's instruction to his team was clear -- India must be able to leave an indelible mark during its one year tenure as the chair as it positions itself as a global economic powerhouse as well as a credible voice for international affairs.

"This showcases the very nature of PM Modi. He goes into the depth of each situation and issue. The preparations that have gone in for G20 Presidency are unparalleled and the way India stood out in the recently concluded summit shows that how detailed and careful the planning was," Gopal Krishna Agarwal, national spokesperson for the BJP, told India Narrative.

Modi at the recently concluded G20 summit in Bali said India is committed to doing everything possible to build a healthier planet.

He also highlighted the progress made by India as it marks 75 years of "freedom from colonial rule".

Issues including climate change, food security, gender equity, digitalisation of the economy among others will be the key focus.

Besides meeting the heads of the states, Modi also met the top bosses of the multilateral agencies including the International Monetary Fund, World Bank and World Trade Organisation among others.

"While the meetings seem more customary in nature, they actually also reflect India's growing influence in the global order," an observer said.

"The meetings are also important as India will assume the presidency of G20 in less than a month and economic agenda will dominate the discourses," he added.

"Vasudhaiva Kutumbakam" or "One Earth-One Family-One Future" is the theme for India's G20 Presidency.

India is expected to hold more than 200 events and meetings in the next one year.

The events will be spread across the country. Several events are expected to be held in Jammu and Kashmir as well.

Each event and meeting will also be presented and prepared in a manner that it stands out and gives a unique contour to the ongoing issues.