Kolkata, Nov 17 (IANS): The Enforcement Directorate (ED) on Thursday arrested Trinamool Congress strongman and the party's Birbhum district president Anubrata Mondal in connection with the multi-crore cattle smuggling case, after questioning him for over five hours.

An ED source said it would soon initiate the legal process for taking Mondal to Delhi and question him at the agency's headquarters in the national capital. 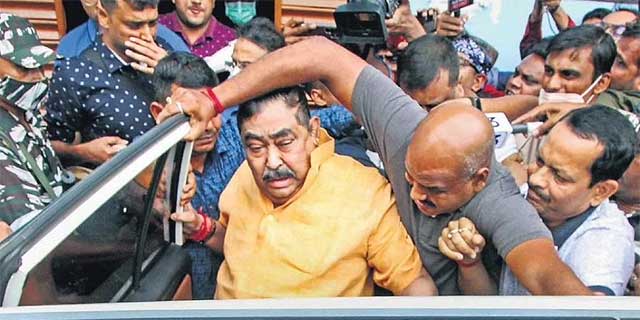 The Central Bureau of Investigation which is conducting a parallel probe in the case, had first arrested Mondal on August 11 this year. Since then, he had been in judicial custody at the Asansol Special Correctional Home.

Meanwhile, it was learned that ED officials will move to a special court in Asansol and seek Mondal's custody in the matter.

At the same time, the agency may approach the Rouse Avenue Court in Delhi for transit remand to take Mondal to the national capital.

ED sources said that during the five and half hours of questioning on Thursday, Mondal thoroughly tried to mislead the officials.

Even when documents relating to a sudden rise in the assets and properties of his family were placed before him, Mondal denied knowledge in the matter and said that all these matters were dealt by his chartered accountant, Manish Kothari.

Finally, the ED officials decided to arrest him.