Buldhana, Nov 18 (IANS): For the first time, the great-grandsons of Mahatma Gandhi and Pandit Jawaharlal Nehru joined hands AT a public event, marched together and pledged to "unite" India, during the ongoing Bharat Jodo Yatra of the Congress Party, here on Friday.

Activist Tushar A. Gandhi and Rahul Gandhi marched a distance of nearly 15 km while crossing the border from Akola to Buldhana from dawn.

When the Akola-born Tushar, 62, approached the march starting point, the 10-years younger Rahul, 52, smiled, received him warmly, greeted him with a hearty handshake and a hug, even as many of the excited marchers and onlookers witnessed the rare rendezvous, some clapping and cheering them. 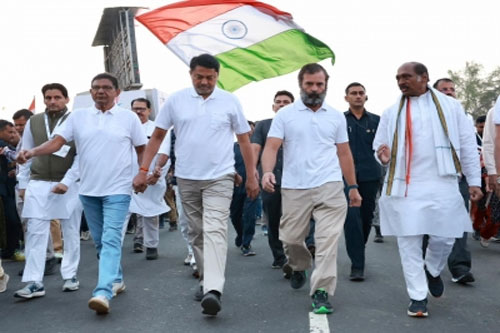 After the initial pleasantries, the duo bonded well and started their 'yatra' marching briskly, much like their illustrious great-grandfathers, Gandhiji (born 1869) and the 20-years junior Nehru, (born 1889), in the previous century.

Later, as historic events transpired, Gandhi was assassinated in 1948 aged 78, while Nehru became Free India's first Prime Minister and passed away in 1964 aged 74.

"I have met Rahul earlier, but I thoroughly enjoyed meeting him here today first time in the BJY. We primarily chatted up on our family traditions, our shared history, and a little bit on the current scenario in the country, how to deal with it et al," Tushar told IANS from the venue.

Quite curious as a cat, Rahul posed several sharp queries about Bapuji to the well-versed Tushar, wanting to know a lot on Gandhiji's younger days, his early role in history, why he became a Barrister and related aspects.

Already a familiar name in India for his anti-apartheid movement in South Africa, Gandhi had first met the young barrister Nehru, 106 years ago, during the Lucknow Session of the Indian National Congress (December 26-27, 1916), along with other party leaders and freedom fighters.

However, unlike their forefathers, Tushar said that he and Rahul did not engage in any political talks nor did the latter make any "offer" to him to re-enter electoral politics, though Tushar had made a vain bid for the Lok Sabha in 1998 from Mumbai on a Samajwadi Party ticket.

To a pointed query whether he would be open to take a second plunge into politics, an elated Tushar responded with a loud guffaw, and a mystery "let's see!" only.

Nevertheless, Congress circles are agog with speculation whether Rahul would formally invite Tushar to join the party and the two like-minded descendants of the country's preeminent Gandhi-Nehru clans would unitedly lock horns with the BJP in the near future.

"I was struck by Rahul's humility and accessibility. He's always quite open, curious to learn more of everything receptive to the other person, interactive without being overbearing. Plus, he's very alert and aware of all those who come to meet him," said Tushar.

A state Congress leader termed the Rahul-Tushar meeting as "historic" as both the flag-bearers of the Gandhi-Nehru dynasties walked together, holding hands and "sending a message to the government" that they will not allow Democracy to be imperiled.

"It seemed as if the Freedom Struggle was repeating itself. When the dictatorship of the British Raj was growing in the country, Gandhi-Nehru had hit the streets taking the nation with them. Today, Rahul is doing the same and Tushar has joined him in the cause," said a Congress statement.

"Whenever hatred, violence and injustice raise their heads, Gandhi-Nehru will come in every era to establish brotherhood, non-violence and justice, not only in India, but also to show the way to the world".