Hyderabad, Nov 18 (IANS): Telangana Chief Minister K. Chandrasekhar Rao's daughter and TRS MLC K. Kavitha on Friday warned BJP MP D. Arvind that if he continues to make personal comments against her she will slap her with chappal (footwear).

Reacting strongly to certain remarks made by him, Kavitha said Arvind had stooped to a new low. 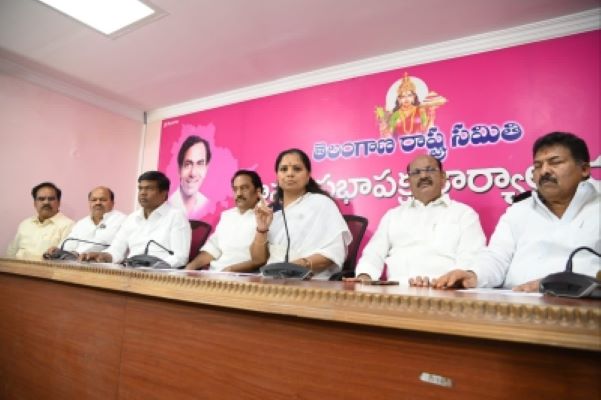 "What do you think of yourself? If you make baseless comments again, I will slap you with chappal in Nizamabad crossroads," she warned Arvind, who represents Nizamabad Lok Sabha constituency.

The MLC apparently vented her anger over Arvind's derogatory remark made on Thursday.

On CM KCR's claim that the BJP is trying to target Kavitha to switch loyalties, Arvind had remarked that CM is "trading his daughter".

The member of Telangana Legislative Council said she had been acting with restraint for a long time but would not keep quiet now.

She slammed the MP for showing no respect for Chief Minister KCR and for making personal remarks against her. She asked the BJP leader what was his contribution to Telangana.

Kavitha, who had lost to Arvind in Nizamabad in the 2019 elections, said she would defeat him from wherever he contests the election next time.

The TRS leader claimed that some friends of BJP had approached her with a proposal but she rejected it.

"I am not interested in any other party. My heart is always in the party where my leader is. CM KCR garu is my leader and he will remain one. My life and my entire political career is with him alone," she said.

When asked if she feared being targeted by central agencies for rejecting the proposal, she said she would face them. "Whatever they do is irrelevant. We will face them. It's not a big deal."

Reacting to the allegations by BJP leaders about her involvement in Delhi liquor scam, she said that there is a court order in the case but the BJP leaders have no respect for any institution in the country.

"I did not get any summons. There is nothing on me. The unfortunate thing in this country is that there are unofficial leaks every day," she said.

"If there is a scam and there is proof. Let the agencies come. We will cooperate," she added.

Kavitha alleged that the Modi government is using ED, IT and CBI to harass opposition leaders.

"As many as 25,000 cases have been registered against opposition leaders. There is not a single case against BJP. Why is there no ED, IT and CBI case against a single BJP leader," she asked.

"If you say Jai Modi there will be no ED. It's like washing powder Nirma. You get cleaned when you join BJP," she added.