Mumbai/Solapur, Dec 5 (IANS): The Maharashtra State Commission for Women has directed the Solapur Police to probe and take action into reports of a Mumbai man getting married to twin sisters in his hometown, sparking a huge furore, here on Monday.

The MSCW Chairperson Rupali Chakankar has asked the Solapur Police Superintendent to inquire, initiate action under the marriage which is illegal under IPC Section 494, and report to the MSCW on priority. 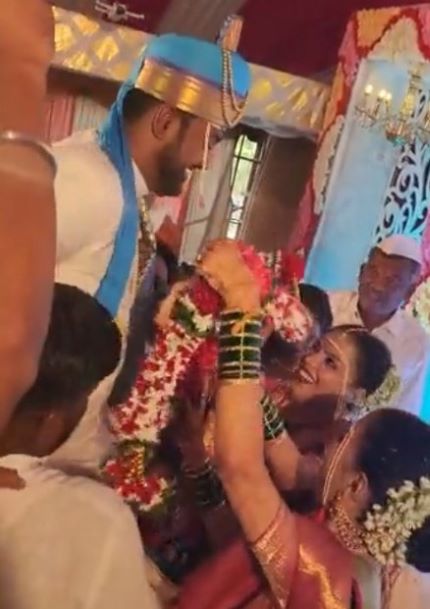 The missive from the women's panel after a bizarre 'setting' in which a Mumbai man -- Atul U. Avtade -- got married to two identical twin sisters, Rinky M. Padgaonkar and Pinky M. Padgaonkar, both aged 36, and are engineers working with a private IT company in Mumbai, and living in Kandivali west.

The marriage took place on December 2 before 300 guests lustily cheering 'the newly married triple' and videos of the event in Akluj went viral on social media.

Latest unconfirmed reports suggest that Avtade was already a much-married man and his first wife raised objections to her husband's new 'double-liaison' with the techie-twins, though police have not yet commented on the development.

The wedding evoked mixed reactions from the social chatterati, including many heartburns with some lamenting how they failed to get even one girl for marriage and this man was marrying two simultaneously!

Finally, a local resident Rahul B. Phule approached the local police, which lodged a Non-Cognisable Offence Information Report on December 3, but advised him to approach the appropriate court.

Locals claimed that Avtade first tied the knot, performed the rituals with Rinky and then did an action replay with Pinky -- all in the same marquee at a private hotel -- which the complainant Phule found objectionable and illegal.

Initial police probe indicated that the marriage purportedly was solemnised with the consent of the families of the groom and the 'twin brides', despite the subsequent protests at the ceremony.

Avtade runs a tourism business in Mumbai but opted for the wedding in his hometown Akluj with the twin sisters who are said to be "inseparable from birth" and couldn't bear the thought of parting after separate marriages.

The Rinky-Pinky twin siblings have enjoyed a strong bond since childhood, share likes and dislikes, cry or laugh, go everywhere together, eat from one plate but feed each other, attended the same college and completed the same engineering course, and joined a company which agreed to hire them both.

Legal experts have pointed out that the 'two-with-one' wedding fails the legality test on various grounds and all three -- Atul, Rinky and Pinky -- can be held culpable of various offences after a detailed probe.