Considered an unprecedented move by a ruling alliance, the bandh is to protest against the Lakhimpur-Kheri massacre in Uttar Pradesh and express solidarity with the protesting farmers near Delhi and other parts of India. 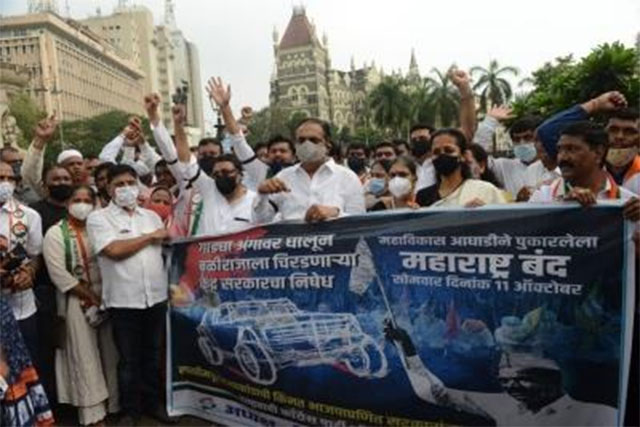 While the city's lifeline BEST services remained off-roads, inter-district State Transport buses were also hit, but the suburban trains functioned normally though with a reduced passenger load, and all other essential services were exempted from the shutdown.

The Maharashtra Police and all other security forces deployed huge bandobast to prevent any untoward incidents across the state, and Home Minister Dilip Walse-Patil warned of action against those indulging in disruptive acts.

However, around half-dozen BEST buses were pelted with stones in different parts of Mumbai. There were road-blocks or tyres set ablaze to prevent some non-essential private vehicles from venturing out.

Top leaders like Sena's Sanjay Raut, Kishore Tiwari, NCP's Jayant Patil, Nawab Malik, Congress' Nana Patole, Balasaheb Thorat, Bhai Jagtap and others at the state, region and district levels led the bandh by way of protests, demonstrations, processions, slogan-shouting against the BJP governments at the Centre and UP.

The shutdown elicited huge response from the rural centres with APMCs downing shutters, though in urban centres a few vehicles were seen on the roads as public transportation was largely paralysed.

In some areas, local shopkeepers complained that they were forced by the ruling parties' activists to shut shops and join the bandh.

Last week, the state Cabinet presided over by Chief Minister Uddhav Thackeray had observed a two-minute silence in memory of the Lakhimpur-Kheri victims and later the ruling alliance announced the Maharashtra Bandh.