Beltangady, Nov 25: The fact that local MLA Harish Poonja lent his shoulder when the palanquin carrying the Utsava Murthy of Lord Venkataramana temple, Layila was going in a procession, has given rise to dispute as some believe that it was a violation of laid out customs and traditions. The young men who invited the legislator to carry the palanquin have paid a token penalty at the temple and sought forgiveness for the mistake they committed inadvertently.

There had been objections about the fact that the MLA was allowed to bear the palanquin and also the managing committee of the temple. The committee therefore called for an emergency meeting and then approached the Swamiji of Kashi Math, Sri Samyamendra Theertha, along with the young men who were at the centre of the controversy, and sought his advice in the matter. The Swamiji advised them to offer coconut and money in token of penalty for the wrong committed the Lord's presence, and seek an apology for the mistake. On Wednesday, the two young men involved with the incident complied with these conditions, it is learnt. 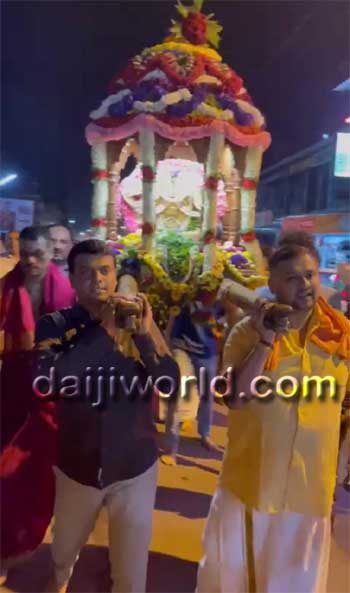 On the day of the festival of lights (Deepotsava) organized annually as per customs on the full moon day of Katika month as per Hindu calendar, the Lord's idol was taken in a procession through the streets of the town at night. When the procession was on its way, Beltangady MLA Harish Poonja who was on his way home, got down from his car and accepted the Prasadam. Some youngsters suggested to him to shoulder the palanquin for a short distance to earn the grace of the Lord, which he did.

There were objections among some members of a community who questioned whether people other than those belonging to the GSB community are allowed to carry the palanquin. In social websites, some have questioned whether Hindus other than GSBs are not allowed to carry the palanquin of the Lord. There are also people who have wondered whether the youth were asked to seek an apology for allowing a non-Brahmin to carry the palanquin. It has to be seen whether the dispute will continue to be the subject for prolonged discussions or whether it will die down as the matter appears to have been closed as far as the temple management is concerned.