Bengaluru, Jan 13 (IANS): After the high court wrap, the ruling BJP in Karnataka on Wednesday night issued prohibitory orders on the Mekedatu padayatra being taken out by the Congress in the state.

Chief Secretary P. Ravikumar issued the order and directed the Congress leaders and the authorities concerned to stop the padayatra with immediate effect.

Chief Minister Basavaraj Bommai has also stated that his government would initiate all possible measures in the interest of public health. 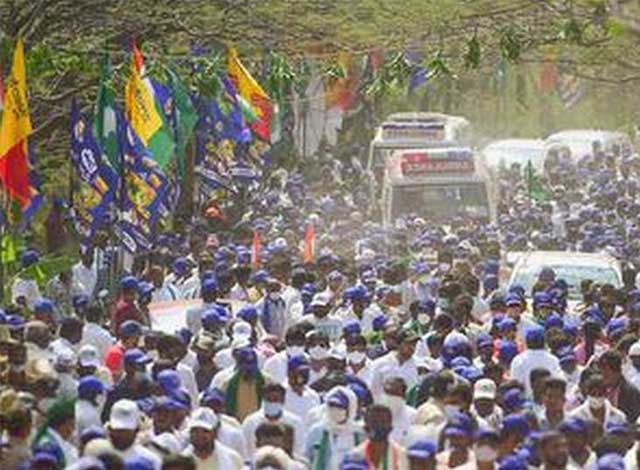 Meanwhile, Ramnagar district has turned a police fortress as about 4,000 police personnel have landed there in the backdrop of the government's order to stop the padayatra.

In his order, Ravikumar stated, "In the exercise of the powers conferred under the Disaster Management Act, I here by direct that all inter-district (within Karnataka) and intra-district (within Ramanagar district) movement of vehicles and persons for participating in the 'namma neeru namma hakku' (our water our right) padayatra or whichever name it is called with a similar purpose from Mekedatu to Bengaluru is prohibited with immediate effect," the order said.

"The order will be in force till further orders are issued for strict implementation by all Deputy Commissioners and Superintendents of Police and Police Commissioners of the state. The Transport Commissioner is directed to take adequate measures to implement the order and aid the DCs and the police department," the order read.

It further warned that any person violating the order will be liable to face action under the Disaster Management Act, 2005, relevant sections of the IPC and other legal provisions.

Meanwhile, without talking the name of the Congress or its leaders, Bommai gave a clear hint that his government is going to initiate the required steps to ensure the safety of the people amid the ongoing Covid crisis.

"All political parties have worked together in the interest of the state when it comes to the question of rights over our land, water and people. Our government is committed to complete the Mekedatu project by taking all political parties into confidence. Presently, the Covid pandemic has hit the state, especially Bengaluru.

Sources said the state government has given a green signal to the police department to not allow the padayatra on Thursday, and if there is any resistance, directions have been issued to arrest the leaders.

With the Congress and its senior leaders sticking to their stand of going ahead with the padayatra, the situation might get tensed on the fifth day of the yatra on Thursday.