Bengaluru, May 14 (IANS/MS): The youth, who had made him scarce in a well-planned manner after flinging acid on a 23-year-old woman in Bengaluru last month and seriously injured her, was finally nabbed by the Karnataka Police from Tamil Nadu's Tiruvannamalai city, where he had disguised himself as a religious seer, officials said on Friday.

Meanwhile, the 23-year-old acid victim has been shifted to general ward following the recovery in her health, 16 days after treatment in Intensive Care Unit (ICU). 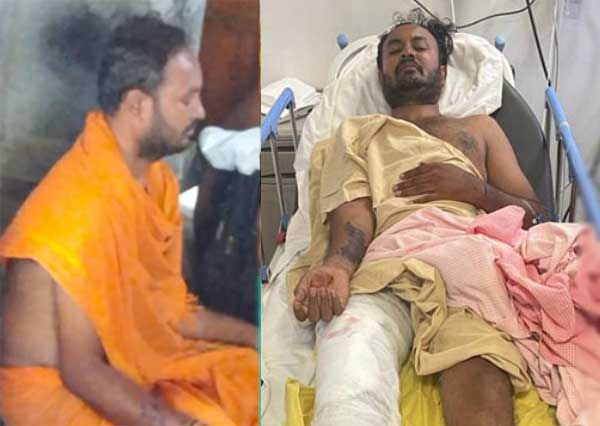 The Karnataka Police had formed 10 special teams to nab acid attacker Nagesh, as pressure came from all corners over the delay in arresting him.

On the delay, Bengaluru Police Commissioner Kamal Pant had, on Wednesday, said: "The efforts that are being put into this case have never been put to any other case this year. No case has ever received such efforts and attention ever. The investigations have shown that the accused had preplanned the act and told his family to vacate the house and disappear."

"The accused has conspired and committed the crime. He has left no clues. Police are putting in efforts to trace the attacker. He will be arrested soon," he added.

Finally, after 16 days, Kamakshipalya police nabbed him in Tiruvannamalai city.

Police were working on clues that the attacker was a devotee and visited pilgrimage centres. Despite searching in various religious sites, the police could not get any clue as he had managed to hide in the ashram as a religious sage, police sources said.

The accused went about clad in saffron and pretended to be a spiritual man. Police personnel also went to the ashram as devotees and after observing and working tirelessly managed to get clues about him and finally nabbed him.

A dramatic twist took place as Nagesh was shot on his legs by the police at Kengeri over bridge in the city. Nagesh had asked the police to stop the vehicle as he wanted to pass urine near NICE road in the city. However, the police stopped the vehicle on the overbridge of Kengeri. Nagesh tried to escape from the police. He attacked constable Mahadevaiah with stone. Inspector of Kamakshipalya police station Prashant warned Nagesh to surrender. But he did not budge and started running. He was shot on his right leg by inspector Prashant. Both Nagesh and injured constable Mahadevaiah are being treated in a private hospital.

The acid attack incident had taken place on April 28. Nagesh, who was waiting in an auto near the workplace of the girl in Sunkadakatte in Bengaluru, had chased and poured acid on her.

The woman sustained 35 per cent burn injuries. The police said that the accused studied in the same school with the victim in SSLC (Class 10). He had proposed to her but she outrightly rejected him, and he had attacked her.

Meanwhile, Karnataka Health Minister K. Sudhakar had visited the acid attack victim in the hospital and assured free treatment. He also announced that the government would provide her with a suitable job once she recovers.

The victim has been shifted to the Special Burning Ward from ICU and she is talking to her parents. Her family sources said that since the victim had responded to the treatment, it was possible for her to recover.

The skin transplantation treatment process is almost done and only 10 per cent is remaining. The girl has been told to take soft food intake.