Mangaluru, Jun 23: The cargo ship M V Princess Miral from which 15 Syrians were rescued by Indian Coast Guards sank completely near Talapadi's Bhattapadi in the Arabian Sea on Thursday, June 23.

The 32-year-old foreign ship bound from Tianjen in China to Lebanon had started getting submerged near New Mangaluru due to the entry of water into the vessel two days ago.

A private Singapore-based agency is examining the modalities of fuel extraction from the sunken ship and what needs to be done with the vessel. A meeting was held in this regard between the district administration officials and the coast guard personnel along with the officials of the departments concerned. 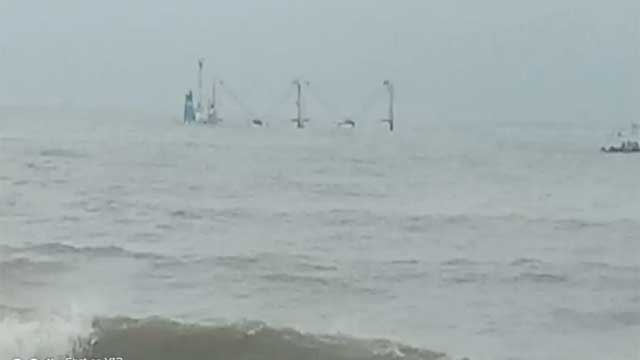 The coast guard personnel have informed the DIG that care should be taken to avoid oil spillages from the ship and also extract the fuel from the vessel.The meeting also directed fisheries department personnel to instruct the fishermen not to conduct fishing in the surrounding areas of the wrecked vessel.

The Karnataka State Pollution Control Board has also been directed to evaluate the quality of the sea water and avoid fuel leakages into the sea.

Mangaluru, Jun 23: The Princess Miral cargo ship, which was stuck at the bottom in the sea at Ullal, is submerged by 70 percent. Considering the present high waves in the sea, there is every possibility that the ship will sink completely.

The ship was carrying steel coils from Malaysia to Lebanon. Due to a technical fault, a hole developed in the front part of the ship. Though the agents of the vessel tried to bring it to NMPT or Old Port for repair, the permission was not granted. Meanwhile, the ship touched the bottom and got stuck at Ucchila. The Coast Guards rescued 15 personnel on board the ship.

The possibilities of repairing the ship are being looked into. The coast guards handed over the 15 crew members of the ship to Panambur police station on Wednesday.

The ship agency owning Princess Miral is thinking of preventing the ship from sinking completely in the sea. The ship is owned by a man of Turkish origin and he is in talks with the representative of Marcan Shipping Agency of Mangaluru. The experts have to arrive from the Smith Salvage company of Mumbai to rescue the ship. It is thought that the owner of the ship may try to salvage the cargo of steel coils at least which is worth crores of rupees.

City police commissioner Shashikumar said that the Syrian nationals, crew of the ship, will be taken care of by the district administration. Later, they will be sent to the detention centre for foreigners in Bengaluru. After the consent of foreign ministry in Delhi, they will be repatriated to Syria.

Port officials, coast guards and coastal protection force police are on Ullal seashore keeping a watch on the ship.