Bengaluru, Jul 1: The comments by former Congress MLA KN Rajanna ridiculing former Prime Minister HD Deve Gowda on his poor health and difficulties in getting up or walking came in for sharp retorts and condemnation by no less a person than the JD(S) supremo, his son and former Chief Minister HD Kumaraswamy and State JD(S) Chief CM Ibrahim, even as KPCC Chief DK Shivakumar and his brother DK Suresh, MP, took their party leader to task and demanded that he should immediately tender unconditional apology.

The issue has emerged as a major point of friction between JD(S) and Congress, especially the DK brothers, who are trying their best to capture the support of Vokkaliga community to which they belong. 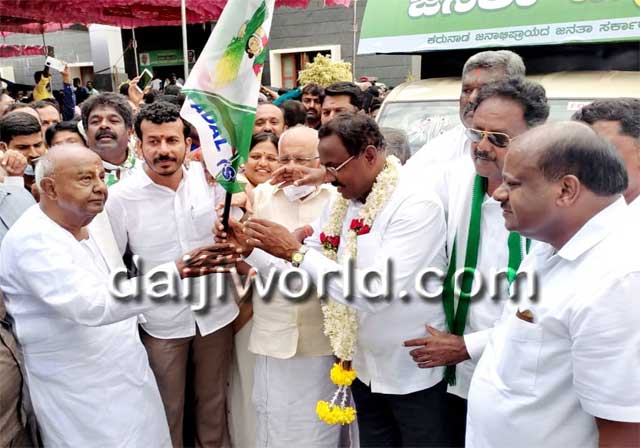 The 89-year-old former Prime Minister, who is still active in politics and is serving as the Rajya Sabha member, attended the launch of the 17-day-long Janata Mitra campaign of JD(S) at its party office in Bengaluru on Friday, said he would give a befitting reply to those belittling the party. He vowed to fight against those who want to trample over JD(S) and attack its leaders,

“I know snide remarks are made against me saying that I cannot stand or get up or walk. I will give a proper reply to those who ridicule the party. I am not going to remain silent,’’ he thundered at the party office.

Deve Gowda said the JD(S) successfully completed its Jaladhare campaign and is now launching the Janata Mitra campaign across Bengaluru. “I will give a reply on what I did for Bengaluru as the Chief Minister. This Deve Gowda is the son of a farmer. I am not bothered about the ridicule or snide comments,’’ he said declaring that the party would prove what is capable of in the coming elections.

The JD(S) supremo called upon the party workers to work unitedly and fight for bringing the party to power. “Be prepared for a fight,’’ he said.

'Rajanna got Gowda’s support but stabbed him'

The JD(S) legislature party leader Kumaraswamy said those ridiculing and passing snide remarks on Deve Gowda’s health exhibit their culture and upbringing. "We will teach these people who pass uncivilised comments and ensure that their arrogance is punished by the people,’’ he warned.

Kumaraswamy pointed out that Rajanna was a JD(S) candidate from Bellavi assembly constituency in 2004 and Deve Gowda campaign on his behalf on the last day. “Because of Deve Gowda’s pull, this man was able to enter Vidhana Soudha as MLA. Otherwise, who bothered about him,’’ he asked and mentioned that Deve Gowda has been working and campaigning for the party unmindful of his health.

The former Chief Minister described Deve Gowda as a godly person as far as the party is concerned and the JD(S) workers revere him. “We are happy to lend him our shoulders,’’ he said and hoped that the party is confident that the former Prime Minister will live 100 years.

He accused Rajanna of conspiring to defeat Deve Gowda from Tumkur Lok Sabha constituency, in which the former Prime Minister was forced to contest. “In another 2 to 3 months, Deve Gowda will be able to walk independently. We are not demanding an apology. I am his son and am still alive. I will visit Madhugiri and ensure that a befitting reply is given (to Rajanna) by the voters,’’ he challenged.

“Deve Gowda is a fatherly figure and is the father of 6.5 crore Kannadigas. Who is Rajanna to talk about Deve Gowda’s health, life and death? Deve Gowda is immortal in the hearts and minds of people. He is the only Kannadiga who hoisted the National Tricolour at Red Fort. Rajanna should personally apolgise to Deve Gowda,’’ he demanded.

Meanwhile, KPCC Chief Shivakumar, who is in Delhi, issued a video statement and his brother DK Suresh too issued a similar statement, asking Rajanna to immediately tender unconditional apology to Deve Gowda.

“Deve Gowda is a most senior and elderly leader who has served and contributed a lot to the State and the country. I strongly condemn the comments by Rajanna and direct him to immediately apologise,’’ Shivakumar said making it clear that entire Congress party condemns the statement against Deve Gowda’s health conditions.

“I fervently pray that Deve Gowda is granted good health to render more service to society,’’ he said and declared that the patty would not tolerate such talk.

In his statement, DK Suresh said Rajana should immediately tender his apology and asserted that it was an insult to an elderly and veteran leader like Deve Gowda. “We bow our head in shame at such snide remarks. It is shameful,’’ he added.

Kumaraswamy said both Congress and BJP have failed the State and the people. He said the Janata Mitra campaign will culminate with a massive public meeting on July 17.

The JD (S) will embark on yet another Pancharathna Rath Yatre in August and he will tour the State for 3 months visiting all villages, during which he will not visit Bengaluru.