CUET 2022: Candidates who missed exams in phase 2 to be allowed in phase 6, says NTA

New Delhi, Aug 13 (IANS): The National Testing Agency on Saturday said that candidates who could not take the CUET UG exams in the second phase will be allowed in phase six.

In a statement, the NTA said: "Those candidates who could not take the examination in Phase 2 conducted on 04, 05, and 06 August 2022 either due to technical reasons or due to cancellation of the Centre, will be allowed to appear in Phase 6 which will be held from 24 to 30 August 2022." 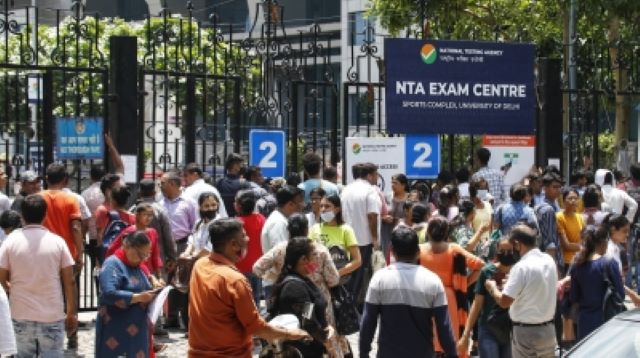 Information regarding the cities and dates of examinations will be sent on Saturday and the Admit cards will be released on August 20.

The National Testing Agency is conducting Common University Entrance Test [CUET (UG)] - 2022 from July 15 onwards at 489 examination centres located in 259 cities across the country and nine cities outside.

Phases 1, 2, and 3 involving about 6.31 lakh candidates are now over. Admit Cards for the candidates who will be appearing for the fourth phase scheduled on August 17, 18, or 20 are being released today.

A total of 3.72 lakh candidates will be appearing in Phase 4. Most of the candidates have been given cities of their choice.

However, there are about 11,000 candidates who could not be given their choice and have been moved to Phase 6. Their examination will be held on August 30. They have also been intimated about their city of examination and exact date.

Some of the candidates who were originally scheduled to take the Examination in Phase 3, on August 7, 8 10, were informed through their Admit Cards that they will be taking the Examination on August 21, 22, and 23.

Their Admit Cards mentioning the centres of examination will be released on August 17. However, their dates and cities of exams are being given today.

NTA with the support of UGC and AICTE has increased its capacity by adding more centre capacity and new institutes are also added as Examination Centres so that the quality of Centre is enhanced and it adds to the experience of candidate in taking the examination.

It has also been decided to station additional technical manpower by deploying the faculty of Associate Professor Level as Technical Observer at every Centre to ensure smooth running of the examination.

NTA said it has also received some e-mails regarding digital glitches faced by individual candidates during previous phase as well as requests for change of date, centre, city and re-examination. Such requests are being examined on case-to-case basis using Audit trail of individual candidates and report of the centres.

The requests, if found feasible, the candidates will be appearing on August 30.

Title: CUET 2022: Candidates who missed exams in phase 2 to be allowed in phase 6, says NTA