New Delhi, Aug 13 (IANS): Indian weightlifters have all the reasons to be proud of their Birmingham show as they managed to win 10 -- three gold, three silver and four bronze -- marginally better than that in Gold Coast in 2018 when India had won only nine medals. The rich medal haul at the 2022 CWG weightlifting promises better results in the Paris Games.

Mirabai Chanu's silver medal at Tokyo 2020 was only the second Olympic medal by an Indian weightlifter after Karnam Malleswari won bronze in 2000 at Sydney Olympics. Chanu also became only the second Indian woman after PV Sindhu to win an Olympic silver medal. 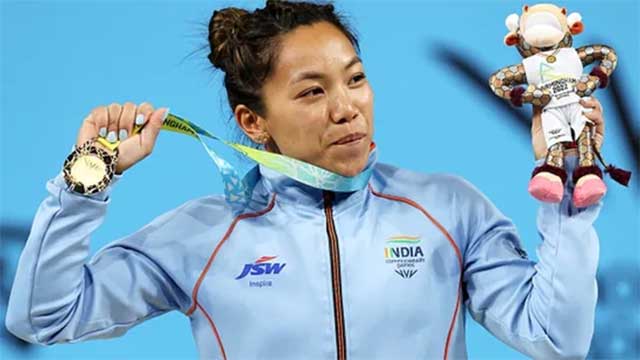 Though India won an extra medal in weightlifting at CWG 2022, what would rankle the Indian officials is that India could win only three gold medals from Birmingham as compared to five at Gold Coast, but fans are expecting a better show from the Mirabai Chanu-led team in the Paris Olympics.

Golden girl Chanu came up with a brilliant performance to top the field by a distance in the Women's 49 kg division with a Games Record. The former World Champion in 49 kg, Mirabai easily retained the gold medal she won in Gold Coast in 2018.

By far the best weightlifter in this class, Mirabai lifted 88 kg in snatch and then added 113 kg in the clean and jerk to leave the opposition way behind.

Now she faces yet another hard road ahead as she eyes her third Olympic appearance at Paris 2024.

The lifter from Manipur will be 30 by then and India's new high-performance director in weightlifting, Aveenash Pandoo, had once said that Chanu will have to prepare 'intelligently' and focus on 'selective tournaments' to increase her longevity.

However, after winning the gold medal in CWG, the ace weightlifter told IANS that she is aware of the competition level in the Olympics but she will try her best to change the colour of the medal in Paris.

"The Birmingham CWG is also preparation for the Paris Olympics. After this event, I have to start preparing for the Olympic qualification. The CWG will help me rectify my weakness. I wanted to test all the work I've done on improving my snatch. It will help me to do better in other events and of course at the Paris Games," Mirabai told IANS after winning the gold medal in CWG.

Going by the performances in Birmingham, fans have reason to pin their hopes on weightlifters to make the nation proud in the Paris Olympics.