On reaching Abu Dhabi on Ganesh Chaturthi, Jaishankar visited the under-construction BAPS Hindu Mandir and laid a brick in its intricate architecture.

"On Ganesh Chaturthi, blessed to visit the @BAPS Hindu temple under construction in Abu Dhabi. Glad to see the rapid progress and deeply appreciate the devotion of all involved. Met the BAPS team, community supporters and devotees and workers at the site," Jaishankar tweeted. 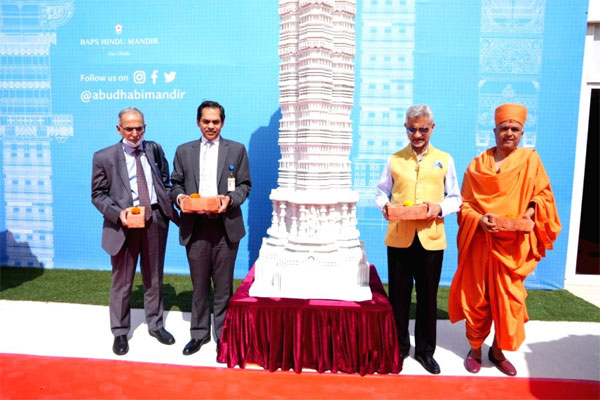 The Indian Embassy in Abu Dhabi tweeted: "Closer than ever! EAM @DrSJaishankar called on HH Shk Nahyan bin Mubarak Al Nahyan @uaetolerance in Abu Dhabi. Hailed the UAE's committment to building a harmonious & cohesive community. Extended thanks for the care and welfare of the Indian diaspora in the UAE."

In another tweet, the Embassy said: "Auspicious beginning to the visit of EAM @DrSJaishankar. EAM visited the @BAPS @AbuDhabiMandir site and laid a brick in its intricate architecture. Also hailed the efforts of all Indians in building the iconic Temple, a symbol of peace, tolerance and harmony."