New Delhi, Nov 17 (IANS): AAP MLA Akhilesh Pati Tripathi on Thursday described Gopal Khari, the complainant in MCD ticket selling matter, as an "agent" who is involved in 50 cases and

has implicated at least 10 people in rape cases.

"He is involved in 50 cases. He had been blackmailing a Director level official of DDA and beaten up his own relatives. Gopal Khari is the man who has framed at least ten people in rape cases," he alleged. 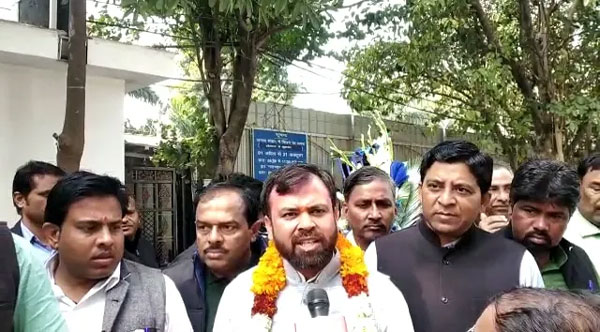 Tripathi was speaking to the media at the office of Anti Corruption Bureau (ACB) where he was summoned to join the probe.

Terming that allegations levelled against "vague", he said, "Om Singh is also not my relative. My wife's surname is Pandey," he clarified on his brother-in-law issue.

The ACB team led by senior officials is now grilling him.

He is being confronted with testimonies and digital evidence collected during the probe.

"The accused were arrested for accepting bribes for giving AAP ticket of MCD election to Shobha Khari, wife of the complainant Gopal Khari, for Ward No. 69, Kamla Nagar," said Madhur Verma, the DCP ACB.

Since the complainant has named him, the MLA has been summoned to join the pobe.

Complainant Gopal Khari, a resident of Kamla Nagar, had approached the ACB on November 14 with the grievance that he was associated with AAP as an active worker since 2014 and on November 9, he met Tripathi with the request to secure councillor's ticket for his wife Shobha Khari.

The complainant further stated that Tripathi demanded a bribe of Rs 90 lakh for the same.

"Khari paid a bribe amount of Rs 35 lakh to Tripathi and Rs 20 lakh to Rajesh Gupta (MLA Wazirpur), at his instance. Khari assured Tripathi that the remaining 35 lakh will be paid by him after getting the ticket. On November 12, Khari did not find the name of his wife in the list of contesting councillors released by the party.

"Thereafter, Om Singh contacted the complainant and assured him that the ticket will be given to him in the next elections. He also offered to return his money (bribe amount). Khari also submitted audio and video recordings of his alleged dealings during payment and return of the bribe amount," said the ACB official.

After receiving the complaint, the ACB formed a team of its elite officials to nab the accused. On the intervening night of November 15 and 16, they laid a trap at the residence of Khari and caught Singh and his associates -- Pandey and Raghuvanshi -- red-handed in the presence of independent witnesses. They had gone to return the bribe amount of Rs 33 lakh out of total 35 lakh received on behalf of Tripathi.

"The bribe amount of Rs 33 lakh has been seized. Further investigation of the case is on," said the official.