Riyadh, Nov 22: After a continued ordeal for more than six months, Ameen Baig Kadar Baig, aged 39 finally reached his home at Thiruchirappalli in Tamil Nadu couple of days back. He left for India from Riyadh International Airport just few days back.

He had arrived in the Kingdom of Saudi Arabia around eight months ago to work in a courier company in Riyadh. He worked for 1-2 months in the company. Due to heavy overworks, health conditions and sub-standard treatment by the company, he decided to stop the work and tried for the transfer of his visa to another company as it was on red category.

Upon knowing it, the employer put him on 'Huroob'(absent to work/escape), which consequently made him redundant. He became helpless, hopeless and had to remain in his room only without free movement. 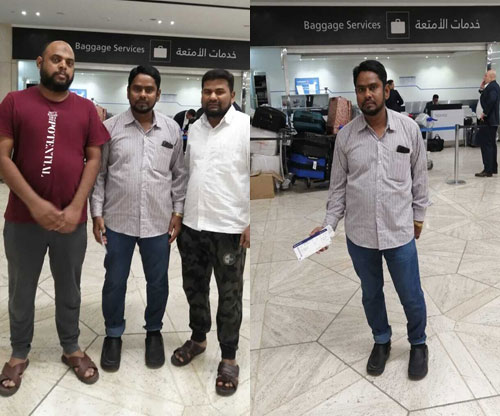 The issue was brought to the attention of Riyadh-based Pro-bono lawyer and social worker, Dr and advocate P A HameedPadubidri for his help.

Dr P A Hameed tried a lot to settle his case amicably with his employer and other concerned persons including a Bengalurean, but they skipped to come for the amicable settlement. The case was then filed in labor office in Riyadh although dozens of employees of the same employer filed cases against the employer in separate cases relating to the labor issues.

While the case was on the move in the labor office, Dr P A Hameed took his case up to the Indian Embassy in Riyadh. After the continued endeavors of Dr P A Hameed, Ameen got a final-exit visa and left for India last week and breathed a long sigh of relief. Suraj Rahim, a Tamil compatriot working in a Company in Riyadh, also supported in this endeavor.

He thanked a lot to Dr and advocate Dr P A Hameed for his all-out supports and humanitarian services. Also, he expressed his gratitude to the Indian Embassy officials and Suraj and others.

Dr and advocate P A Hameed, who was also a former Taluka Panchayath Member, requested the Tamil Nadu Government to provide financial aids or interest-free loans from the CM Public Relief Fund (CMPRF) or CM Relief Fund (CMRF) to the people, who are gulf-returnees especially to those who got stuck in various problems and difficulties in the gulf countries.

Another Labour Case:
In a separate labor and jail case, Dr P A Hameed exerted his much efforts and is successful in releasing Abdul Raffeeque Putthur Majal, a resident of Mogral-Kerala. He was imprisoned in Al-Hassa jail in Saudi Arabia based on a complaint filed by his employer and former business partner. Abdul Raffeeqe and his Saudi employer were doing business together for many years in Al-Hassa. The business was very lucrative for the duo and doing well for years.

After few years, a dispute arose between Raffeeque and his employer for some reasons including the downfall of the business after the Covid-19. The dispute reached its pinnacle when Raffeeque demanded his final exit with the employer, who, in return, filed a Huroob (escape) case against Raffeeque. Based on this, the police nabbed him and put him jail for almost two weeks in AlHassa and then was shifted to Riyadh deportation centre.

Upon requests of Raffeeque's relatives and friends, Dr and advocate P A Hameed immediately contacted the Indian Embassy, Human Rights Commission in Riyadh for his release and consequently he was released from the jail and was repatriated to India. He, his family and friends expressed their immense gratitudes to Dr P A Hameed and Indian Embassy for their help.