"I would like to congratulate Shri Madhu Pandit Dasa and the devotees of ISKCON Bengaluru for conceiving this magnificent Sri Rajadhiraja Govinda Temple. This temple radiates a divine and sublime atmosphere and I feel blessed to participate in the Gita Jayanti event. India is the storehouse of spiritual knowledge, that has been followed and adapted by other nations. Bhagavad Gita is the living Jnana Ganga which is blessing all of us through its transcendental knowledge," he said. 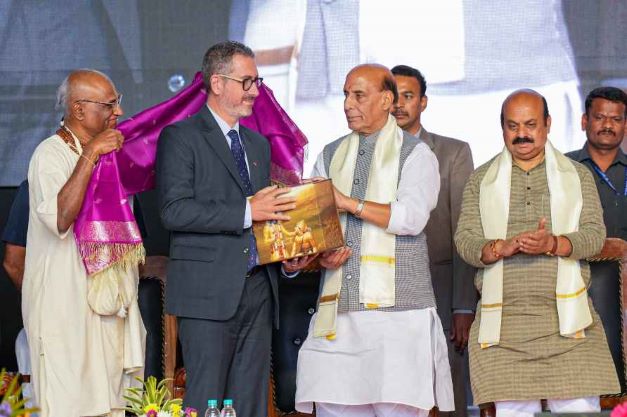 "The Gita has influenced prominent people like philosophers and intellectuals all over the world. I encourage everyone, especially youth to read the Bhagavad Gita and adopt its principles in their lifestyle. Distribution of knowledge is the highest among charities. I wholeheartedly appreciate ISKCON Bengaluru for spreading the immortal wisdom of Bhagavad Gita through the Gita Dana Yajna initiative," the Union Minister added.

Speaking on the occasion, Karnataka Chief Minister Basavaraj Bommai said: "Bhagavad Gita is the 'Song of God' spoken by Lord Krishna Himself. It is a blend of science and spirituality to uplift humankind. Srila Prabhupada's Bhagavad Gita provides a complete understanding on life and solutions to all problems on every page."

Senior BJP leader B.S. Yediyurappa who was also present on the occasion, said: "Bhagavad Gita is the mother of all religions, the need of the hour that provides insightful solutions to all the problems of life. Today, lakhs of people are attracted to Lord Krishna due to the efforts of Srila Prabhupada. The Gita Dana Yajna Mahotsava by ISKCON Bengaluru is a great initiative to spread the message of Sanatana Dharma."

ISKCON group of temples in Bengaluru aim to distribute one lakh Bhagavad Gitas during the month-long Gita Daan Yajna. Many activities based on the Bhagavad Gita will also be organised during this period.

Various groups of children and adults chanted the 700 shlokas of the Gita in the temple complex.