Mangaluru, Jan 24: Horticulture minister Muniratina, who visited the arecanut disease prone farms of Dakshina Kannada district and promised help to cut off the disease infested leaves of the tree, has not even approved the proposal.

Due to weather change, the leaf scar disease of arecanut plants is reduced a bit. However, agriculturists cannot heave a sigh of relief.

Muniratna, who visited the farms two months ago, said during that time that he has sought details of the extent of spread of the leaf scar disease, the number of agriculturists affected by it and promised that he will release grant to buy Doti (harvesting pole) to cut the leaves and also provide pesticide to spray after cutting the leaves. 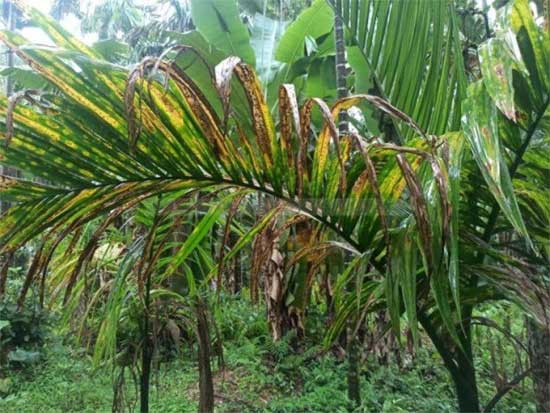 Agriculturists and district horticulture department officials say that the intensity of the leaf scar disease is reduced a bit due to change in weather. When humidity is more in the weather, the disease spreads faster. As the weather is dry now, the intensity is reduced.

In Dakshina Kannada, the leaf scar disease has affected 3502.37 hectare area of arecanut farms. 4859 farmers have informed horticulture department of the same. So far Rs 1.6 lac worth pesticide is distributed for spraying on the affected areas.