Bengaluru, Jan 25: Both Congress opposition leader Siddaramaiah and Health Minister Dr K Sudhakar got themselves embroiled in trading insults and abuses against each other with the former dismissing the minister as ‘stupid’ to be warned of falling into ‘Kolar Khedda’.

Siddaramaiah, the former Congress Chief Minister, said Sudhakar is ‘stupid’ and is ‘unable to read or understand the CAG report’ and accused the latter of trying to ‘curry favour with RSS after jumping over to BJP’ by uttering ‘grave falsehoods which are worse than those of RSS or original BJP leaders’. 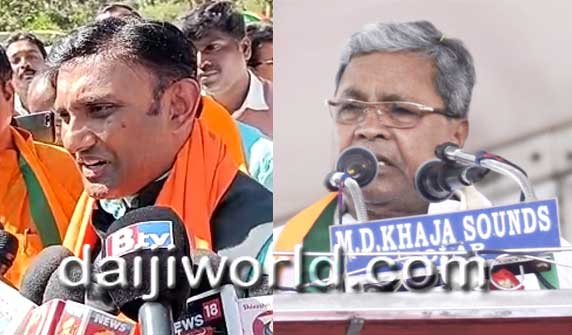 Dr Sudhakar, on the other hand, said some local leaders of Kolar have invited Siddaramaiah to Kolar and have pushed him in the ‘Khedda’ as Kolar is a tough constituency for the Congress and the former Chief Minister will not win. “Finally, he may not contest from Kolar and shift to Varuna.’’ He also warned that he will tour Bengaluru Rural, Kolar and Chikkaballapur districts extensively and work for the success of BJP candidates and also for the BJP candidate against Siddaramaiah.

The former Congress Chief Minister spoke to media persons with documents to disprove the charges levelled against him by Sudhakar and explained that the report for the year 2016-17 was audited and reported by CAG in the year 2018. The CAG report has clearly said: “Non reconciliation of expenditure was to the extent of 19 percent of total expenditure.’’

What the CAG said was, "19% of Rs 1,86,052 crore or Rs 35,000 crore in the financial year of 2016-17 is not reconciled’’ and this, according to Sudhakar is the “indictment by CAG of the corruption,’’ Siddaramaiah said pointing out that there is no sense in the contention.

“I thought Sudhakar is an MBBS doctor. Evidently, he is unable to understand CAG report. Reconciliation report is termed as AG reports. He does not understand AG report. Whether allocation and expenditure is reconciled is pointed out in the AG report. There will always be some percentage variations in the reconciliation report,’’ he said explaining that the unreconciled allocation was 49% in the year 2008-09 and does Sudhakar know who was heading the government then.

“During 2015-16, the unreconciled allocation was just 16%, when the Congress was in power,’’ he said pointed out that he obtained information from the AG (Accountant General) and read all everything mentioned. "The report has clearly mentioned that the government has done many improvements in reconciliation,’’ he claimed.

Siddaramaiah pointed out that there was 50% non-reconciliation during the BJP rule and during Congress rule it was barely 16% or 18%. “Instead of appreciating the good work, Sudhakar has termed it as corruption’’ and ridiculed the Health Minister that “making money over dead bodies during the Corona pandemic is corruption.’’

“The Public Accounts Committee headed by H K Patil has stated that Rs 3,000 crore of corrupt deals had taken place during the Corona pandemic period in 2020-21 alone and the report has been submitted to Assembly Speaker. This is corruption,’’ Siddaramaiah said and accused the Speaker of not placing the report on the floor of the house forgetting that he is answerable to the assembly and not RSS.

The Congress leader claimed that ‘widespread corruption’ had taken place even during 2021-22 on account of Corona pandemic. “The Public Accounts Committee had written to the Accountant General to conduct audit of the period and the latter has replied that the Administrative Department of the government must write. "But the Health and Medical Education Department, which is the Administrative Department, has not given the permission to the AG at all. If Sudhakar is not corrupt, why the permission was not given? Let him answer that,’’ he said.

Siddaramaiah said there was another instance to prove Sudhakar’s stupidity is his allegation about Rs 1,085 crore corruption pointed out by CAG in Agriculture, Horticulture, Home, Transport and Public Works Department. “But the CAG has not said anything about corruption or irregularity and has merely said more amount than mentioned in the budget has been spent. The explanation given by CAG is Revenue was due to release of Government of India’s contribution of Rs 1235 crore towards NDRF funds on the last day of financial year 2016-17. How can this become corruption,’’ he asked.

No Scam in White Topping

The Congress leader refuted Sudhakar’s charges on the White topping in Bengaluru and pointed out that former Chief Minister B S Yediyurappa had constituted a 4-member team headed by Capt Doddihal, retired Chief Engineer of Central Government’s Quality Monitoring Cell, in 2019.

The Committee had H S Jagadish, Basavaraj Shivanshimuth and Nagendra as members and the committee had conducted a thorough probe into Tender Sure, White Topping has and other works and submitted a report. After detailed investigation, the committee has in its report said there was no irregularity and the Yediyurappa government had accepted the report. ``Despite all this, Sudhakar’s allegations on the corruption on white topping shows his mentality,’’ he said.

The Congress leader alleged that Chief Minister Basavaraj Bommai is “making a buffoon out of Sudhakar, who wants to be the ring leader of BJP’s Alibaba and Chalis Chors and deliberately making the latter to spit out lies from him mouth.’’

Siddaramaiah reiterated that Sudhakar had “sold himself for money’’ by defecting to BJP and claimed that former Chief Minister Veerappa Moily had opposed his selection by stating that ‘’Sudhakar is a big fraud’’ and the then election committee had Moily, Parameshwar and Madhusudhan Mistry.

“We will field a good candidate in the election against him and ensure his defeat as desired by the people of Chikkaballapur,’’ he said.

The Health Minister Dr Sudhakar offered to provide all details of expenditure in the Health Department and challenged Siddaramaiah to get a probe instituted. “I am ready to face the consequences,’’ he said.

Dr Sudhakar said that he has mentioned the CAG reports for the years 2013-18 and the Rs 35,000 crore irregularity mentioned in the report. “As for the alleged irregularities in the Health Department during the Covid period, a detailed reply was given in the house and the Congress members had walked out without even listening to the reply. I am prepared to bring out a White Paper,’’ he said and explained that BJP had given more strength to Lokayukta by abolishing ACB.

“I am ready to furnish details of all expenditures in Health Department during the last three years till the last paise to Siddaramaiah. He is free to conduct any probe,’’ he said claiming that Karnataka has received the award from media institution for being the best state in Covid management.

Dr Sudhakar said Congress leaders did nothing to bring a medical college in Kolar and it will be done by BJP in future. “I have the blessings of the people. In Cricket, batsman plays by looking at the ball and not the bowler. I have won from Chikkaballapur three time because of blessings from the people. Chikkaballapur is my best pitch,’’ he declared.