Mangaluru, Sep 22: Joshiana 8.0, a 2 day national level IT fest for the students of MCA, MS, MSc, MTech and BE (CS & IS) hosted by ‘The TechnoCrats’, the students association of department of Computer Applications of St Joseph Engineering College (SJEC) was inaugurated on Thursday, September 21.

The IT fest was inaugurated with the lighting of the lamp by the dignitaries including Dr Niranjan U C, director-research and training, Manipal Dot Net Pvt Ltd, Manipal, who was the chief guest at the inaugural function. The other dignitaries present on the dais were Fr Wilfred Prakash D Souza, director, SJEC who presided over the ceremony, Fr Rohith D’Costa, assistant director, SJEC; Dr Joseph Gonsalvis, principal, SJEC; Dr Rio D’Souza, vice-principal/dean-MCA, SJEC; Sumangala N-I/C HOD MCA, SJEC; Hareesh B, convener of Joshiana 8.0; Nagma G, president, TechnoCrats and Shwetha Vatsa, secretary, TechnoCrats. 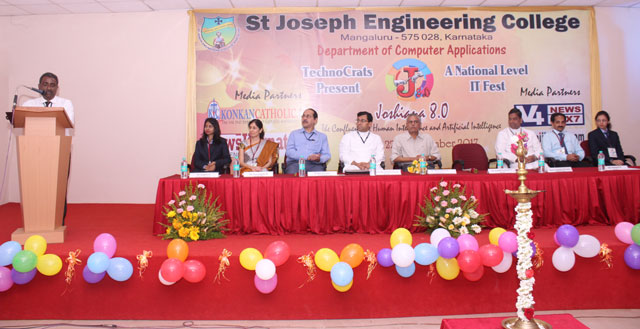 The function began with the invocation of the divine by the college choir. The gathering was welcomed by Sumangala who extended warm welcome to all the people present during the inaugural and dignitaries were then felicitated by the staff members. Nagma G briefed the gathering about the events that is going to be held over the two days. This was followed by unveiling of the trophies for which the participants were competing against each other.

Dr Niranjan addressed the gathering wherein he voiced his opinion on coping up with the growth in technology. The principal and the director of the institution spoke conveying their best wishes to the participants as well as the organizers.

The curtains were drawn on the inauguration ceremony with the vote of thanks delivered by Shwetha Vatsa, secretary, TechnoCrats, thereby declaring the fest open to all. The compere’s role for the inaugural ceremony was donned by Prithvi V Shet from III year MCA.

The events are being conducted by the MCA students over two days and the judges have been invited from in and out of the college. All in all 20 teams have registered for Joshiana 8.0 and around 170 participants are being a part of the fest.