Mangaluru, Feb 22: Sri Rajashekarananda Swamiji of Vajradehi Math, Gurupur, is one of the outspoken leaders of Hindutva in the district. He has identified himself with the Sangh Parivar and taken part in numerous protests.

Known for making provocative speeches and controversial statements, he has openly confronted ‘love jihad’ and cattle trafficking. Swamiji was also in news after he announced that BJP has planned to field him in the Assembly elections back in 2018. 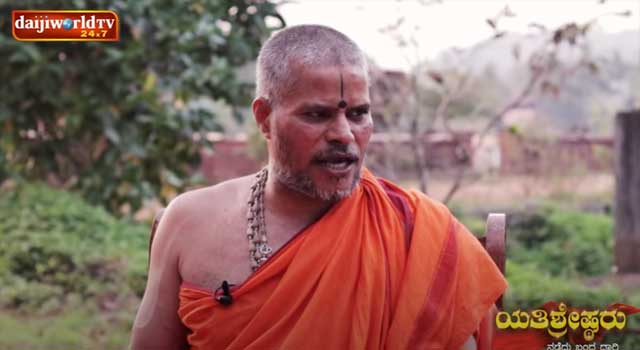 Sri Rajashekarananda Swamiji, in an in-depth interview with Daijiworld editor-in-chief, Walter Nandalike on Daijiworld 24x7 channel's 'Yatishreshtaru' programme, speaks how he became a sage, his activities and the Math.

DW: Vajradehi Math has devotees not only from the coastal region, but also across the world. Moreover, the head of the Math is familiar to everyone. Please tell us about Math.

Swamiji: I was always enthusiastic in social service. Hence, I converted my ancestral home into a Math. 'Vajradehi' is another name of Lord Hanuman. As I worship Vajradehi, the Math was named after him. I or the Math never became rich in assets, but the Math is rich in social service and respects every religion.

DW: When was this Math established?

Swamiji: It was established in the year 2000.

DW: Swamiji, can you throw light on 'Purvashrama', about your birth, family and your childhood?

Swamiji: I was born in 1972 on May 28, in Kuthethur, Kamabalimane near Soorinje. My parents brought me here when I was six years old. Later, I joined aided Hindu Higher Primary School. I have six brothers and three sisters.

DW: Was your family into agriculture?

Swamiji: Yes, we were doing agriculture. It was our life.

DW: When did you obtain 'Deekshe'?

Swamiji: After I came in contact with Sri Vidyamaanya Teertha in 2000, I obtained 'Sanyasa Deekshe'. Initially, though he was not ready to accept me, after Panyadi Raghupathi Upadhyaya, Vedhamurthy Arun Bhat Kandige and Suryanarayana Tantri recommended me to him, he accepted me. Before accepting me as a disciple, I was subjected to a test, to know how enthusiastic I was in Sanyasa. I became a saint by following the tradition of Ashta Maths.

DW: What was your name in 'Purvashrama' or before accepting Sanyasa?

Swamiji: My parents had named me as Nonayya. After 'Sanyasa Deekshe' I was named as Rajashekarananda Swami. As my Math was named 'Vajradehi', devotees call me as Vajradehi Swami.

DW: Who is your role model?

Swamiji: I consider the person who taught me as my role model. Sri Vidyamaanya Teertha should be awarded as 'Santhashresta'. He had abundant knowledge. He share the same among his disciples. Many people acquired knowledge from him, including Vishwesha Theertha Swamiji of Pejawar Math, Sugunendra Theerta Swamiji of Puttige Math and Vidhyadeesha Shripada of Palimaru Math. Many saints have learnt from him. Bananje Govindha Acharaya was also inspired by him.

DW: Swamiji, I have observed that you know Beary and Konkani languages other than Kannada and Tulu languages. How did you learn them?

Swamiji: I learnt Konkani from a person who returned from seminary education. I was with him for nine years. Hence, I could learn Konkani. I learnt the Beary language as my neighbours were speaking the same.

DW: Being a saint, how is your routine lifestyle?

Swamiji: Usually, we should wake up at 3 am. After practising meditation and other activities, a religious pooja will be held for the deity of Math. Later I have my breakfast. Another pooja will be held later in the afternoon after which I have my lunch. During the night, we usually have fruits. As I have a health problem, I prefer Chapathi and fruits. I have appointed a Brahmachari to perform poojas in the Math when I am out on tours.

DW: Did Vajradehi Math receive any grant from the government?

Swamiji: No. Vajradehi Math has not received any major support. In past, when Yediyurappa was the chief minister (CM), I had met him and he had sanctioned Rs 50 lac for the Math. It was during the coalition government. Later, when D V Sadananda Gowda was the chief minister, along with MP Nalin Kumar Kateel and RSS leader Prabhakar Bhat Kalladka, I had visited the CM. In the first instalment, he released Rs 25 lac. Later from the CM's grant, he gave me Rs 5 lac. Along with the Rs 30 lac I received and raising Rs 30 lac from donors, the work on the ground floor of the orphanage has been completed.

DW: What is your message for our viewers and devotees?

Swamiji: Through 'Yatishreshtaru' programme, Daijiworld is giving a good message to the society. Daijiworld has highlighted church priests, their life, and their problems to society. In the entire coastal Karnataka, for the first time, Daijiworld has taken this initiative to interview swamijis to know about their life. My message is that everyone in the society should lead a peaceful and happy life.