Exclusive: People should follow their religions, but not hurt others - Sri Mukhtananda Swamiji

Mangaluru, Mar 21: Sri Mukthananda Swamiji has made an extraordinary impact on the lives of many through his spiritual and social service. He has adopted 15 villages and formed 25 self-help groups to enable people to lead a self-reliant life. Swamiji has also started Grama Samrudhi Sahourdha Sahakari Bank to help people become financially stable. 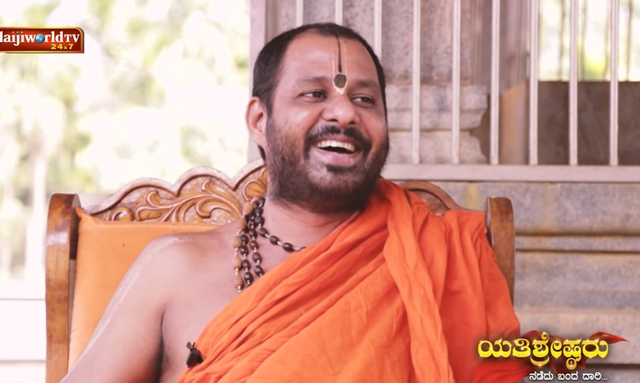 
DW: Swamiji, can you tell us more about this 'Kshetra'? When was it established?

Swamiji: In 2004, Karinje was a hilly place. At that time, I was 20 years old. During those days this place was lacking basic facilities, and there was no proper connectivity to reach Karinje. Later, I constructed a small temple of Lakshmi Sathyanarayana at a cost of Rs 7.5 lac with the help of donors. The temple was inaugurated during 'Datta Jayanti'. People from different faiths supported me. A Christian family gave me Rs 1.5 lac to me to hold Brahmakalashotsva during my hard times. In this place, importance is given only for devotion, not for the offerings.

DW: You entered this spiritual life at the age of 20 years. Swamiji, can recall your childhood and about your family?

Swamiji: I was born here. My parents were staying here. But my uncle (father's elder brother) asked my father to leave home. My father took my mother to Mangaluru. Later, my grandfather asked my father to come back. When I was eight years old, I was inspired by Sri Raghavendra Swami of Mantralaya. I started worshipping lord Vishnu and Mukyaprana.

DW: What was your name in 'Purvashrama'?

Swamiji: My name in Purvashrama was Rajesh. In childhood, I was also inspired by Odiyoor Swamiji. I used to visit Odiyoor during those days. 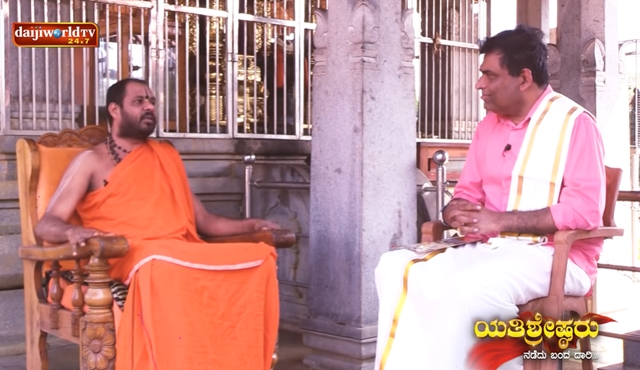 DW: What about your education?

Swamiji: I did my higher primary education in Karinje, and my high school education continued in a convent. I did my college education at Mahaveera college. I then discontinued my education, worked for the construction of the temple by taking the path of spiritual life.

DW: Who offered you 'Sanyasa Deekshe' ?

Swamiji: I became Sanyasi out of my own interest. No one forced me to become Swamiji. Initially, my parents were opposed to me becoming Sanyasi. They never accepted it. My father opposed but my mother supported me later. I can say that the blessings of my mother helped me grow to a certain extent. Sri Raghavendra Swami offered solace to many poor families, irrespective of caste, religion and community during his tour. Thus, as a follower of Raghvendra Swami, there is no practice of untouchability in the Math, and everyone, irrespective of their caste, religion and community is treated equally here. Devotees from all castes and members of different faiths are here. Manila Mohandas Swamiji offered me the 'Sanyasa Deekshe'.

DW: What are your routine activities?

Swamiji: After coronavirus broke out, there was a slight change in my routine activities. Due to health issues, there are slight changes in my activities. Earlier, I used wake up at 4 am. After 10 am several devotees come to this temple with various problems. I give guidance to the people. If they are suffering from health issues, I suggest them to go the doctor.

Karinje is a place for the poor. First priority is given to the poor. There are 600 children who are gaining an education in 'Balasamskara Kendra' here. In the Math, 100 students are taught Yoga, Bhajans, Dhyana and Samskara. I have adopted 15 villages, and there are 250 self-help groups working. Grama Samrudhi Sahourdha Sahakari Bank has been started for the economic sustainability of the people. Two branches of the bank are getting ready to open. I did this not because of any vested interest or for personal gain. It is entirely for society. We are conducting blood donation camps. There is a team to donate blood in case of emergency. There is a team to take the government facilities to the poor. We are making a sincere effort to uplift the people who are below the poverty line.

DW: Can you share with us your moments of happiness and pain experienced in your life?

DW: How is your bond with your family and friends of childhood?

Swamiji: All my classmates have a good relationship with me.

DW: How do you feel when you retrospect your past?

Swamiji: I can definitely say that there is God. I have realized it.

DW: What is your message to the people of all religions?

Swamiji: I am a staunch follower of Hindutva. I have identified myself with the organisations. I have been projected as the Swamiji of RSS and BJP. People even say that after Vajradehi Swamiji, I am the one who speaks tough. Still, many people from Muslim and Christian communities come to me. I have studies the real concepts of Hinduism, Christianity, and Islam. India is a sacred land that has allowed people of different faiths to live together. Everyone should follow their religion faithfully, but no one should hurt others. We should not oppress people in the name of religion. We should live as Jesus Christ said, "Love everyone, forgive everyone". Even, Prophet Mohammed said you should respect the land where you live, respect the people who belong to majoritarian faith there, and respect the administration of the land. Krishna said the world is your family. I am not confined to one religion. This spiritual life should be for the welfare of the poor. I have plans to help the poor and the elderly people.

Title: Exclusive: People should follow their religions, but not hurt others - Sri Mukhtananda Swamiji