Mangaluru, Apr 24: Sri Sri Sri Sathyanandatheertha Swamiji of Sivagiri Math in Varkala, treats everyone equally irrespective of caste, community, and religion. He emphasizes that the message of Sri Narayana Guru should be understood properly and implemented in life then there will be no conflict in the society. Swamiji has the vision to educate youth through religious preaching and education. 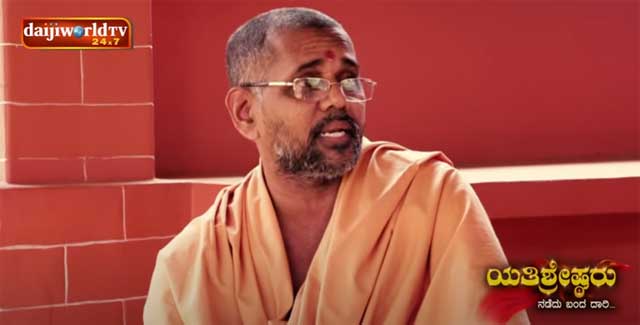 DW: Swamiji, can you tell us about the Sri Kshetra Sivagiri?

Swamiji: Narayana Guru was born in 1855, on August 28. He was born on the fourth day of Onam, Chempazhanthy, Thiruvananthapuram. For 32 years continuously, he practiced spirituality. Learning the condition of people in the society, he realized that society can be transformed through temples. During those days, people from backward classes were not allowed to temples, especially Billawas, Thiya or Ediga communities in Kerala. So, he constructed a temple for the backward class in Aruvippuram. The steps taken by Narayana Guru became a revolution in Kerala. There are 79 temples in the country consecrated by Narayana Guru. Later, he built the Math at Varkala. Sivagiri is the place where Narayana Guru's Samadhi is situated. Several dignitaries have visited this place. When Lalu Prasad Yadav was the railway minister, he visited this place. A memorandum was submitted to him to name Varkala railway station as Varkala Sivagiri railway station. Within one month, he had renamed Varkala railway station as Varkala Sivagiri railway station. After Shankaracharya, Narayana Guru is the saint who gave shape to Sanyasa tradition in the country.

DW: Can you tell us about your 'Purvashrama'?

Swamiji: I was born in Indiranagar in Haleangady. I studied till seventh in UBMC higher primary school in Haleangady. In my childhood, I used to visit Narayana Guru Mandir in Haleangady when I was in second standard. I used to perform Bhajans. Later, I went to Bombay, joined night school by working in a canteen in port during day time. I started thinking about Narayana Guru after I saw his portrait in a building at Modi Street there. Later in 1992, under the leadership of Mumbai Billawa Association’s J C Suvarana, Ravira Anchan, and Dinesh Amin Mattu, 200 people including me were taken to Sivagiri. I completed my 10th in Mumbai. Later, I joined Godrej company. When I visited Sivagiri, I had no interest to come back to Bombay. On March 4, 1994, I decided to quit the job and go back to Sivagiri at age of 22 years. I
learned Malayalam in three months.

DW: Your parents had how many children?

DW: What was your name in Purvashrama?

Swamiji: Shivananda Suvarna was my name in Purvashrama.

DW: When you came to Sivagiri, who welcomed you?

DW: How was your spiritual life after taking Deeksha?

Swamiji: In Sivagiri, after we took Deeksha, we were sent to one particular division of service of our interest. Initially, I worked in Sharada Math in Sivagiri. Later, I worked in different branches. Now, I am performing Pooja to the Samadhi of Narayana Guru for seven years.

DW: How many Swamijis are there in Sivagiri?

Swamiji: There are a total of 45 Swamijis in Sivagiri.

Swamiji: You know that Kerala is a communist-ruled state. Very few youths come to the field of spirituality. Even at home, there is no such atmosphere. When I received membership, there were 70 saints. Now it is reduced to 45. Very few youth come forward to accept Sanyasa.

DW: As of now, you are settled here for the past three months. When will you return back to Sivagiri?

Swamiji: Due to the effect of coronavirus, I am here. I was ill, so I came to take rest here in my native.

DW: How is your routine?

Swamiji: In Sivagiri, I wake up at 3 am. Maha Samadhi Mandiram should be opened at 4 am to perform rituals to the samadhi.

DW: What is the message of Sri Narayana Guru?

Swamiji: 'One caste, One religion and One God' is the message of Narayana Guru. God is one, but the form of worship and names may be different. He also said that we should not insult other religions. All religions are equal. The essence of all religions is one. In his Bhrama Vidhayala, Quran and Bible classes are taught.

DW: Swamiji, can you share with us, the moments of extreme happiness and pain in your life?

Swamiji: In life, we come across various instances of happiness and pain. For 25 years, I have been serving this Math. In my native, I have experienced one unpleasant thing. Serving in Narayana Guru's Math in Sivagiri is a pleasant thing in my life. Youth these days do not know much about Narayana Guru's contribution. When I arranged a trip to Sivagiri in 1997, people from different communities and faiths came to Sivagiri. Narayana Guru is for everyone irrespective of caste, religion, faith and community.

DW: What is your future vision? Any plans in Tulunadu?

Swamiji: If I get a land here, or any donors donate me land in Udupi or Dakshina Kannada, I will open a branch of Sivagiri Math here. Because the message of Narayana Guru is not properly reaching people here. This Math will work to propagate religious culture and discipline among people.

DW: What is your message to our viewers?

Swamiji: In the present scenario, there is confusion in the society in the name of caste, religion, and God. If we understand the message of Narayana Guru, there will be no conflict in the society. As guru said, we should provide education to our youth and along with that, we should give religious education to them. Temples should have a library and continuous religious preaching should be held there. Leaders from all communities should see that their youth will not deviate from their culture and tradition. Then the dream of Mahatma Gandhi's Ramrajya will be realized.