Mumbai, Oct 21 (IANS): Bollywood megastar Shah Rukh Khan on Thursday morning went to meet his son Aryan, currently lodged in a barrack with other criminals at the Arthur Road Central Jail (ARCJ) , after his detention and arrest by the NCB in a drugs case.

The pony-tailed senior Khan sporting dark shades and a black facemask over a grey half-sleeved T-shirt was virtually mobbed by the paparazzi and the hordes of policemen as he entered the menacing barred gates of the ARCJ in the congested south Mumbai.

Accompanied by a couple of their lawyers, the father-son duo met ahead of Aryan Khan's bail plea, which is likely to come up before the Bombay High Court later in the day. 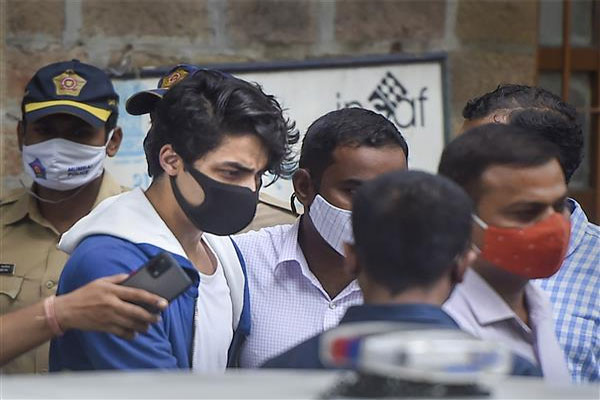 However, despite a volley of media queries, Khan moved around with folded hands but without response, as he emerged after a 10-minute tete-a-tete with Aryan.

This is the second meeting between the King Khan and the cub, who has spent 20 nights away from the family den, the posh 'Mannat' in Bandra, after he was detained by NCB on October 2, arrested on October 3, and has remained in continuous custody till date, shocking Bollywood circles and their fans.

Earlier, a couple of days after his arrest, Khan had taken permission of the NCB to meet him briefly in the agency's lockup, when Aryan was in tears over his predicament.

At one point, mother Gauri Khan had landed up at the NCB lockup carrying packets of pizzas for her son, but was not permitted and returned with the parcel.