Mangaluru, Nov 27: Admissions for the year 2021-22 are continuing. As compared to the previous years, the number of children who have been admitted into schools has been quite high this time.

This year, right from first to tenth standard, admissions in all schools including aided, private and other schools, have touched the figure of 3,20,998. This is 1.01 percent higher than the target of 3,20,947 set for the district as a whole. 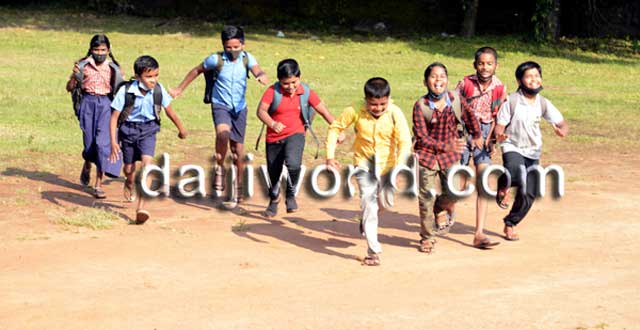 Percentage-wise, Bantwal block is in first place with Beltangady in the second spot. Moodbidri is at the last spot with 98.58 percent achievement. The officials now sense that the parents are now showing interest in sending their children to schools by shedding their inhibitions as the coronavirus threat has significantly waned.

In rural places, most of the children have shown their preference for the government schools. Children of migrant workers from districts in the plains and north Karnataka have returned with their parents, and they have also contributed to the achievement of the target. Aided schools are ahead in total admissions. They have reached a figure of 50,847 as against the target of 46,229. Government schools are in the second spot with admission of 1,02,518 students, which is 104.05 percent of the achievement over the target of 98,532. Private schools have not performed well as they have reached the figure of 1,61,247 as compared to the set target of 1,67,614 with 96.2 percent achievement.

In Udupi district, government schools are ahead. The admission target set for the district was 1,59,656 and the achievement was 1,58,812. In Byndoor taluk however, 26,675 children have got admitted as against the target of 26,422. This taluk has registered 253 more admissions as compared to the target.

Malleswamy, deputy director of public instruction, Dakshina Kannada, said that the admission process is continuing and that in the coming days, student dropouts will be identified and admitted in the schools.