Mangaluru, Nov 27: Because of the fact that development works like concreting of the roads, underground drainage, footpaths etc are progressing at an agonizingly slow pace, the people have been reeling under various traffic problems from the last some months.

Works like the Smart City, Amrut, Jalasiri, gas pipeline etc have been undertaken in the hub of the city and interior parts. In some cases, the works have not been concluded even after a year of commencement. Therefore, the people using the roads here are compelled to grapple with problems like traffic block, high density of vehicles etc. In some cases, there are no warning signs at the entry point of a road and the drivers come to know about the fact that the road has been dug up only after reaching that point, which poses a problem of reversing the vehicles. 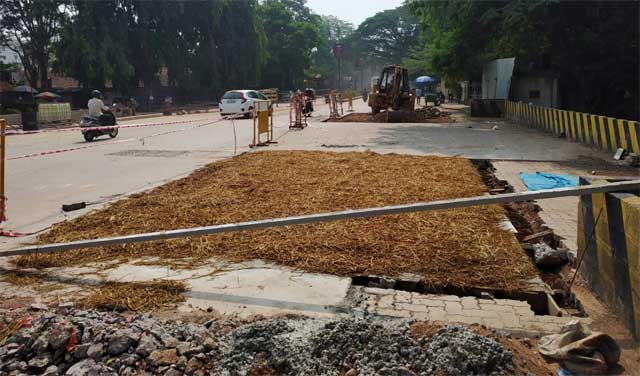 It has been a month since the underground drainage work was taken up on Kadri Kambla road. People going towards Bunts Hostel and those returning on this road have to take a detour. As concrete roads are being laid on the jail road, vehicular traffic has been banned. The road between Besant and Sharada Vidyalaya is closed. Underground drainage work is going on in the interior road near Mount Carmel school, Maryhill. Therefore, traffic chaos has become the order of the day in front of the school. Traffic on Sharavu temple road that had been blocked has resumed now.

As schools and colleges have reopened now, the density of traffic increases in the morning and evening hours. Even emergency vehicles including ambulances find it hard to move. On the days on which marriages are organized in city halls, traffic problems occur. Many people blame the GAIL pipeline work that has been going on for a long time for creating problems.

Some works are delayed as the contractors take up several projects together and they face shortage of labourers. As they try to distribute resources, manpower and machinery in several places, all the work moves very slowly. Roads dug for underground drainage are repaired after a very long time. In many places, roads are dug for drainage after the same is concreted. This results in wasting of public resources.

Mayor Premananda Shetty, has requested the people to bear with the corporation as several development works have been undertaken together. He said that the concerned would be asked to complete the work speedily.