Kejriwal, who is in the coastal state on a two-day visit, said that Palekar would be contesting from the St Cruz assembly constituency in North Goa.

"We said we will give a Goa CM face whose heart beats for Goa and who is willing to give his life for Goa, who can take everyone along in Goa irrespective of religion, caste. And most importantly, he should be an honest man. That man is Amit Palekar," Kejriwal told reporters. 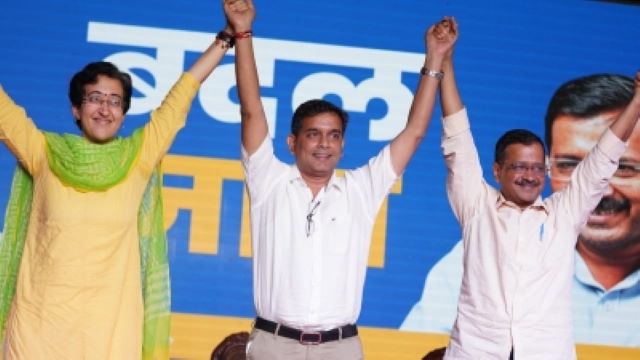 Palekar joined the party a few months ago but was indirectly thrust with high profile political and activism-linked assignments. Palekar belongs to the Bhandari samaj, one of the largest non Brahmin caste groupings in Goa.

Kejriwal last year had promised that the party would field a Chief Ministerial face from the Bhandari samaj, a caste grouping which the Delhi Chief Minister said had been largely deprived of political representation at the very top.

"You have seen the dirty politics of the last five years and in the last two months you have seen it fall at such a level that the Goans have begun to feel ashamed. We have entered politics to change this and are asking for one chance to bring a change," Palekar said soon after accepting the mantle.

"I was a victim of scams. Despite being a state ranker, because my father had no money I didn't get a government job. And I decided that one day I will fight against this injustice. I want to thank Arvind Kejriwal for this opportunity," he also said.

The AAP is contesting the state assembly polls in Goa under its own steam and has steered clear of alliance offers from the Trinamool Congress, Congress and other regional parties.