A day after Nawab Malik's arrest, MVA & BJP protest against each other

Mumbai, Feb 24 (IANS): A day after the Enforcement Directorate (ED) arrested a serving Cabinet Minister Nawab Malik, the ruling Maha Vikas Aghadi and Opposition Bharatiya Janata Party protested against each other across the state on Thursday.

Leaders of the Shiv Sena-Nationalist Congress Party-Congress staged a sit-in agitation near the statue of Mahatma Gandhi outside Mantralaya and all over Maharashtra to protest against Malik's arrest and the manner in which the Centre has 'unleashed' central probe agencies to harass and topple non-BJP governments in the country. 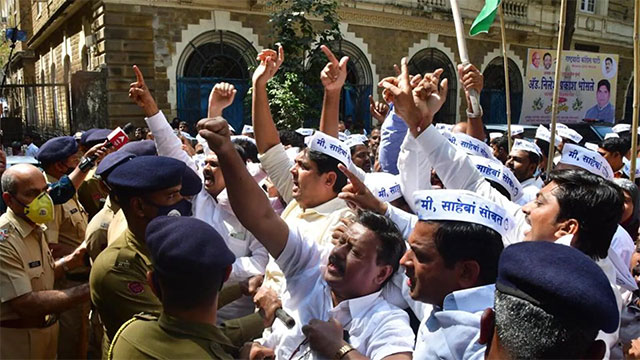 The BJP leaders demonstrated in Mumbai, Thane, Pune, Nagpur, Aurangabad and other cities alleging Malik has "mafia connections" and he must either resign from the cabinet or be sacked immediately.

They raised slogans against the central government, flaying the 'political vendetta' through the misuse of probe agencies, harassing leaders to break or bend them to grab power at any costs.

The BJP city, state and regional leaders organised noisy demonstrations at railway stations, bus stations or other public places demanding the resignation of Malik, accusing him "financing terror operations" through the absconder mafia don Dawood Ibrahim Kaskar and his family.

The Maharashtra Police maintained tight security at all the government and opposition protest venues, as the MVA grappled with its biggest political crisis after it won the 2019 Assembly elections and the BJP lapped up its major political opportunity in the past 27 months since the latter lost power.

In an unprecedented pre-dawn development on Wednesday, the ED picked up Malik from his home, took him to the ED office around 7.30 a.m. and handed him the summons, and after 8 hours placed him under arrest on charges of alleged money-laundering case arising out of a tainted land deal nearly two decades ago.

Title: A day after Nawab Malik's arrest, MVA & BJP protest against each other