Dubai, May 15: ‘Raj Sounds & Lights’ Tulu film which is making noise in the coastal cine world has crossed all the boundaries to become one of the first Tulu movies to have gained fame in 19 countries and having sold out shows in the United Arab Emirates much prior to the release. All the tickets of the first premiere show in Dubai, Abu Dhabi and Sharjah’s six shows in NOVO Cinemas are totally booked and Tuluvas are craving to grab the tickets with innumerable calls pouring in though there are no tickets available for the premiere shows across the UAE. Official overseas distributers Sandhya Creations are looking out for arranging more shows across the UAE in the coming days. 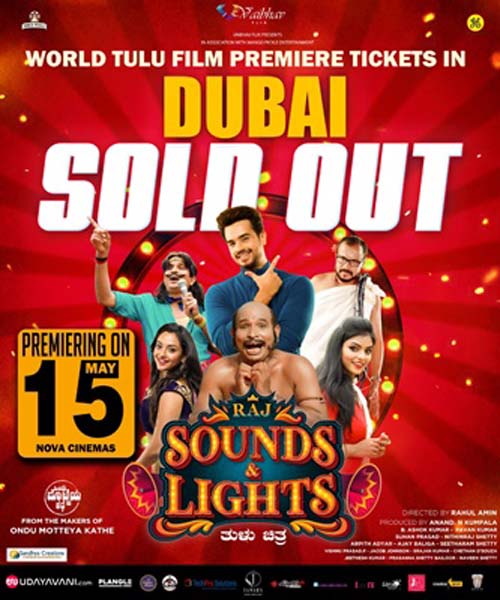 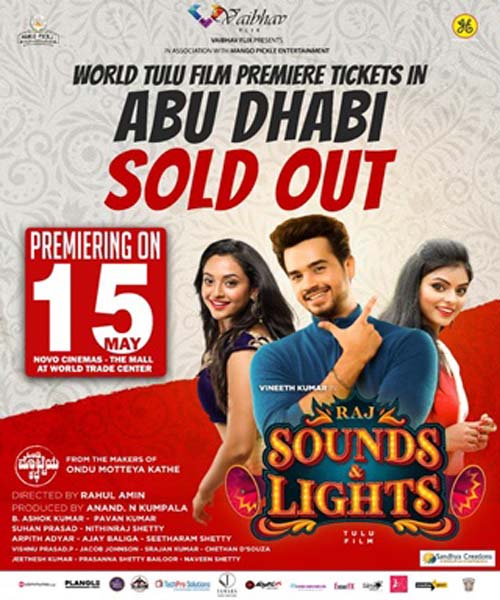 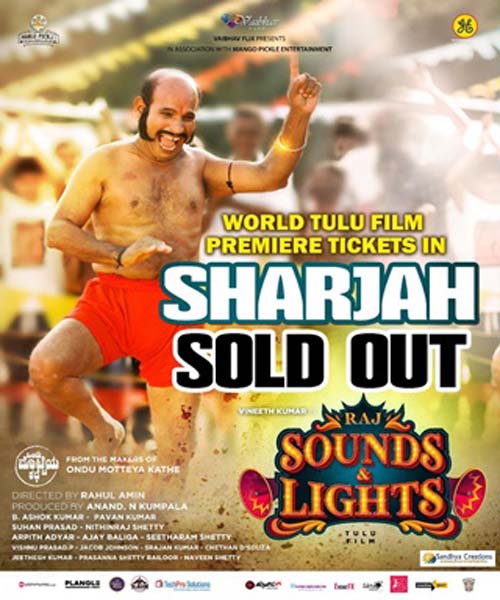 The much talked about, but yet to be released ‘Raj Sounds & Lights’ is all geared up for the world premiere in Dubai and in 19 countries on May 15 across the world. The advance premiere shows in Qatar and Muscat which happened just a day ago was a super hit with lot of positive videos on the viewers’ response floating on the social media. The Tuluvas who did not get an opportunity to be part of that are requesting for more shows in their territory.

‘Raj Sounds & Lights’ created a niche market across the world and paved way for the Tulu film industry making huge noise of being one of the finest Tulu films ever made. This is the voice of international Tuluvas who always want Tulu to be promoted all over the world and made the dream come true of the producers of ‘Raj Sounds & Lights’ who wished to unite Tuluvas worldwide on the special day of the world premiere.

For the first time in the history of Tulu films, ‘Raj Sounds & Lights’ will be released across 11 countries USA, UK, UAE (Dubai, Abu Dhabi, Sharjah), Bahrain, Kuwait, Saudi Arabia, Oman, Qatar, Nigeria, Zambia, Israel and 6 major cities in India Mumbai, Pune, Baroda, Mysuru, Mangaluru and Bengaluru in between May 13-15 in many theaters simultaneously.

From the makers of Kannada film ‘Ondu Motteya Kathye’, the directorial Tulu film of Rahul Amin, ‘Raj Sounds & Lights’, is being presented by Vaibhav Flix in association with Mango Pickle Entertainment. This is being distributed overseas by Sandhya Creation Overseas Movies led by Shodhan Prasad.

www.daijiworld.com will be capturing and telecasting the live programme in Daijiworld TV 24x7.

The story is penned by director Rahul Amin along with VJ Vineeth.

After the world premiere shows, the movie will release in other places on May 20.