Mangaluru, May 27: Culprits from other states are taking advantage of city buses that are filled with passengers during morning and evening rush hours. They surround the passenger in the bus and remove the wallet within seconds and get down from the bus and vanish. Passenger comes to know only when he gets down from the bus.

Cases of pickpocket are increasing in buses and public places under the city police commissionerate. 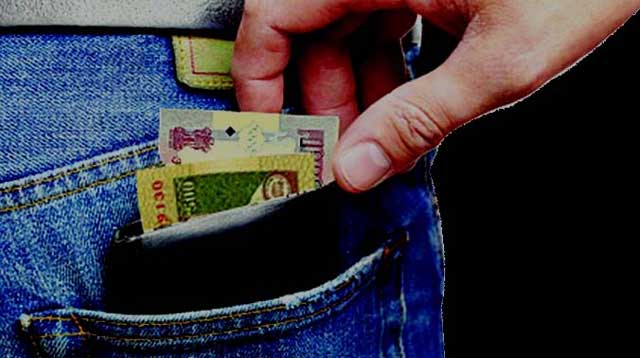 In the case that occurred on May 24 a businessman of Bejai had gone to Thokkottu to meet his relative at Harekala Pavoor. He boarded route number 55 bus. As there were more passengers he travelled in standing position. He was wearing a white dhoti and a Bermuda shorts inside it. He had kept some amount in the pocket of his Bermuda shorts. The entire money from his Bermuda shorts pocket was pickpocketed without his knowledge. He came to know only when he reached his relatives’ house.

Similarly, Vaman Shaktinagara lost Rs 2,000 in the bus at around 6.30 pm when he travelled from his hostel to Kulshekar by bus.

In another incident, a burqa clad woman was standing outside an ATM near Valencia. When a man came out after withdrawing money from the ATM, she said that her ATM card was not working and she needed Rs 4,000 in cash. She also asked the person’s mobile number and said that she will Google Pay the amount from her husband’s mobile. Taking pity, the man gave her Rs 4000 after taking down her mobile number.

The woman, quickly hired an autorickshaw and fled the spot. After sometime, when the man called the mobile number he got a ‘not reachable’ message on his phone. It is learnt that the same burqa clad woman has cheated people at three or four ATM kiosks in the city.