Parents place paralysed boy before Cross on hill, plead for his life

Belagavi, June 22: In a heart-wrenching incident, a couple took their son suffering from brain fever to a hill, lay him down before the cross of Jesus Christ, pleading with the god to heal their son from illness.

The incident was reported from a hill on the outskirts of Nandagada village of the district on Tuesday. The villagers who noticed this inquired with the couple. The couple confided that the boy was suffering from severe illness and they had come to the hill seeking divine intervention.

The sick boy is the 8-year-old son of Krishna Sutrave and Amba, a resident of Joida in Uttar Kannada. Their son is paralysed due to a brain fever. They had consulted several doctors in various hospitals and provided treatment for his recovery by spending lakhs of rupees on his treatment. But, recently his health deteriorated and the doctors gave up hope. Hence, the helpless couple along with their son were trying to take refuge in Jesus Christ. 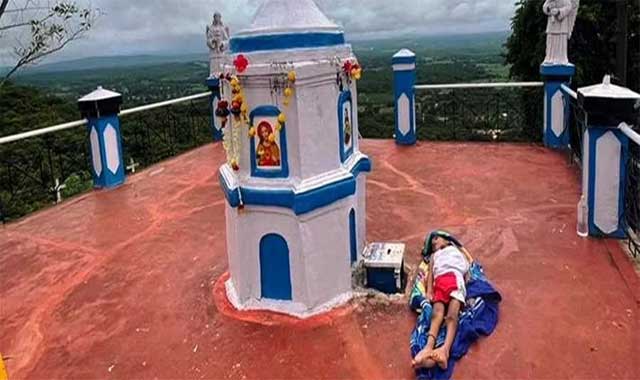 They had arrived at Nandagada six days ago and were staying at their relatives' house. After their prayers, the family members took the boy to their residence.

There is a historical relevance for the cross on the hill at Nandagada. In 1920, when people were suffering from a plague, a priest from the village came to this hill and performed mass prayers. There is a belief here that from generations together, the prayer done by the priest had yielded positive results. Hence, yearly several people throng the hill for worship.

Title: Parents place paralysed boy before Cross on hill, plead for his life