Athens/Riyadh, Jul 27 (IANS): Greece and Saudi Arabia will explore further bilateral cooperation in many sectors with emphasis on energy, as announced by the two sides during the two-day visit of Saudi Arabia's Crown Prince Mohammed bin Salman bin Abdulaziz to Athens.

"We would like to explore further opportunities between our two countries and our two economies to partner and to attract more Saudi investment into Greece," Greek Prime Minister Kyriakos Mitsotakis said in statements welcoming the Saudi Crown Prince on Tuesday, according to Greek national broadcaster ERT. 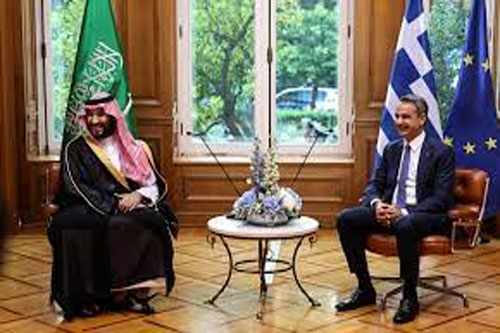 "Linking the grid of electricity, we can provide Greece and southwest Europe through Greece much cheaper renewable energy ... Also, we are working about hydrogen and how to turn Greece as a hub for Europe for hydrogen. That is a game changer for both of us," Mohammed bin Salman said on his part.

He added that trade and security are also on the agenda of discussions during his visit, Xinhua news agency reported.