New Delhi, Aug 6 (IANS): Union Home Minister Amit Shah on Friday criticised the Congress for holding a nationwide protest, saying that inflation and unemployment were only excuses, as its main agenda was to protest against the Ram Mandir by staging demonstrations in black clothes.

According to Shah, since the beginning of the ongoing Monsoon Session of the Parliament, the Congress has been protesting against price hike, rise in GST on essential items, and unemployment in normal clothes. However, its choice to wear black on August 5, which is considered as Ayodhya Diwas, was to disrespect Ram 'bhakts' and oppose the construction of the Ram temple. 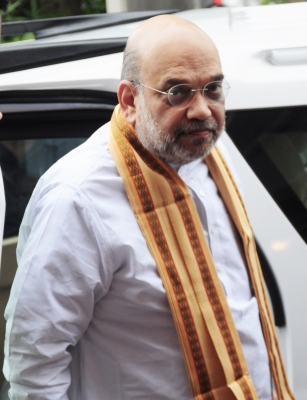 Shah said on August 5, 2020, Prime Minister Narendra Modi had performed Bhoomi Pujan at Ram Janmabhoomi in Ayodhya, which is considered a sacred place by crores of Indians where the construction of the grand Ram temple is going on in full steam.

Shah said that post Independence, the Congress, which was mostly in power, did nothing to solve the age-old Ram temple issue, but Prime Minister Modi resolved it peacefully and laid the foundation stone for Ram Janmabhoomi with great pride.

"The Congress does not have the courage to say this openly, but even today its policy of appeasement politics continues. Today all the Congress workers wore black clothes to subtly send out the message that they are opposing both the laying the foundation stone and construction of the grand Ram temple," Shah said.