Kaup, Aug 13: Household items worth lacs of rupees got damaged in a rented house at Polipu Circle as it caught fire due to electrical short circuit.

The fire mishap occurred in the house at Polipu Laxminarayana Complex in which Gururaj and Shakila live on rent. Short circuit occurred in the refrigerator. The fire entered the house of their neighbour Krishnaraj also. 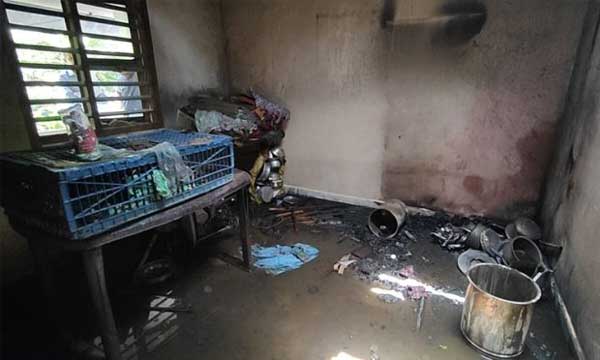 All the household items like refrigerator, fans, clothes and electrical wiring is burnt due to the fire. The total cost of the damaged items is Rs 3.5 lac.

Krishnaraj, whose house is attached to the rented house of Gururaj, also caught fire and burnt the fans and electrical wiring causing thousands of rupees of loss.

Due to the timely operation of Udupi fire service personnel and local youths, the fire was brought under control immediately. This saved a major incident as the fire would have engulfed the whole building.

The couple and children had providential escape as Gururaj had gone to his daily wage labour work, while his wife Shakila took her children to school. After dropping children to school, Shakila went to Kaup market. By then the fire had engulfed part of the house and the neighbour’s house also.