Udupi: No need of lesson from those who joined hands with Pakistan, China – Shobha Karandlaje

Udupi, Aug 13: “There is no need for Congress to teach patriotism to RSS. We do not want lessons from people who joined hands with China and Pakistan. We need not learn patriotism from those who insulted India in Italy and Europe,” said union minister Shobha Karandlaje.

Speaking to the media on Saturday August 13, Shobha further said, “Congress always speaks cheaply about RSS. They say that they are the reason this country earned freedom. You challenge RSS to upload display pictures on social media of the national flag. There is patriotism in the body and mind of RSS. Congress was formed for the freedom struggle. Gandhiji has asked to disburse the Congress which was formed for the freedom struggle. 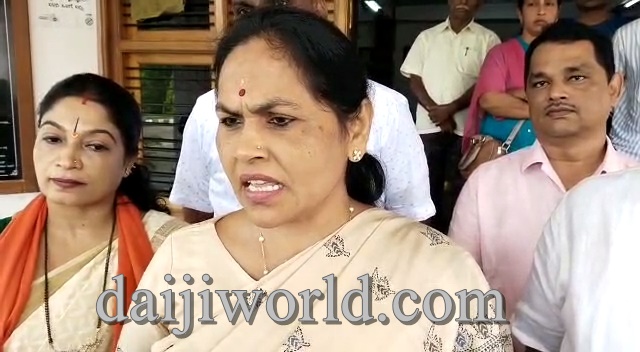 “Congress leaders are still clinging to the old banyan tree that was planted by their forefathers. Congress has failed to take legal action on the RSS. The RSS is in this country for its protection and survival. The motto of RSS is to propagate patriotism,” she said.

Speaking on the brutal murder of youth BJP leader Praveen Nettaru, she said, “Praveen was a person who was not involved in any controversy. We are unable to understand the psyche of those who murder Hindu youths. The murderers of Praveen should be punished in stringent manner. Which is the power behind Praveen’s murder? Who financed them? Who instigated and sheltered the accused? The NIA will investigate all these facts. Not only behind the murderers, but NIA is chasing every one. Fear should be created so that this kind of incident will not recur. I have asked the home minister to see that the accused are punished severely whatever be the circumstances be. Home minister Amit Shah has responded to my demand.”

Reacting to the issue of BJP giving high position to the accused in Paresh Mesta case, Shobha said, “I have come across the discussion that is going on in social media. The government should pay attention to where they have gone wrong and take action. We all have fought for justice for Paresh Mesta. No development that will hurt the sentiments of the Paresh Mesta family should take place. If something has gone wrong, that should be set right and investigated.”

“Lacs of people have died for the tricolour, got imprisoned and hanged. Many lives were sacrificed before the tricolour was hoisted on the Red Fort. The tricolour should flutter on every house and mind. The tricolour is not the symbol of any religion. The rules and regulations to fly the tricolour are withdrawn for three days,” said Shobha about the 75th Independence Day celebration.

Shobha concluded by saying, “I am confident that the Amrit Mahotsav (Platinum Jubilee of Independence Day) will take place regardless of the hurdles of caste, religion and political parties. The tricolour should and will be hoisted on every house. It should be an inspiration for patriotism to children and youth of this country. Minds of those who criticise the matter of hoisting the national flag are polluted. Hoist the tricolour for those who have sacrificed their lives for our freedom and our soldiers who protect our borders. No politics is required in the matter of the national flag.”

Title: Udupi: No need of lesson from those who joined hands with Pakistan, China – Shobha Karandlaje