Baghdad, Aug 17 (IANS): Iraqi caretaker Prime Minister Mustafa al-Kadhimi has invited rival political parties to a meeting on Wednesday to seek a solution to the political deadlock through a national dialogue.

"I invite the leaders of the national political forces to a national meeting at the government palace on Wednesday to launch a national dialogue for a solution to the current political crisis," al-Kadhimi said in a statement.

Iraq is "experiencing political challenges and a political deadlock, along with their repercussions on the government's performance", Xinhua news agency quoted the caretaker Prime Minister as saying. 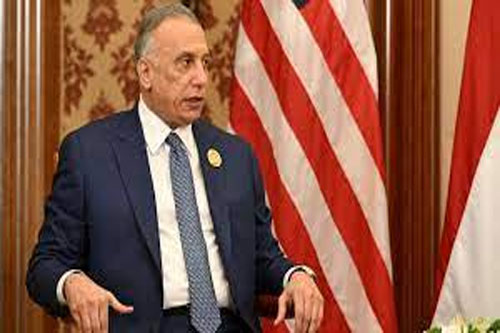 Earlier in the day, he accepted the resignation of Finance Minister Ali Allawi who cited "the rampant conflict between the political parties that affected the implementation of reforms" as the reason for resigning.

Al-Kadhimi's invitation came as the political disputes escalated in the past weeks between the prominent Shia cleric Moqtada al-Sadr and his rivals the Coordination Framework (CF), an umbrella group of Shia parliamentary parties.

On August 3, al-Sadr urged his followers to continue their sit-in protest until their demands to dissolve Parliament and hold early elections are met.

The CF became the largest alliance in the Iraqi parliament after al-Sadr ordered his followers in the Sadrist Movement, the biggest winner of the elections held on October 10, 2021 with 73 seats, to withdraw from Parliament.

During the past months, the continued disputes among the Shia parties have hampered the formation of a new Iraqi government, making it unable to elect a new president by a two-thirds majority of the 329-seat Parliament under the constitution.

If elected, the President will appoint the Prime Minister nominated by the largest alliance in Parliament, now the CF, to form a new government that would rule the country for the next four years.