Bengaluru, Sep 21 (IANS): The decision of the ruling BJP in Karnataka to include teachings of the Bhagavad Gita in schools and colleges from December has triggered a debate.

Announcing it in the Assembly on Monday, Education Minister B.C. Nagesh stated that the teachings of the holy Hindu scripture would form a part of the 'Moral Education' syllabus.

"There is no proposal before the government to teach 'Bhagavad Gita' to students along with the present syllabus as a special subject," he said. 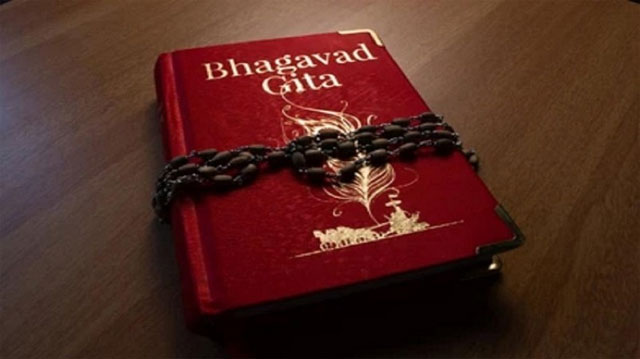 However, Professor, an activist and educational expert Niranjan Aradhya V.P, told IANS on Wednesday that the decision to make an announcement in this regard before the committee's report is "premature" and "hasty''.

"The decision of the government is incorrect. Whether it helps students or not is a different matter. In the academic quarter, bodies will prepare the syllabus for students. Principles of every religion should be inculcated in the book," he said.

Once the committee is formed and its recommendations are out, then discussion could be held. Without a committee making any decision, how can the minister announce that the Bhagavad Gita would be taught from December? Niranjan Aradhya questioned.

Clarifying the question, the Minister had said he stated in the written answer that there is no proposal to teach Bhagavad Gita with the present syllabus this year. But, Bhagavad Gita would be included with the Moral Science subject. For the same purpose a committee has been formed and as per the recommendations of the committee from December, Bhagavad Gita will be included there as per everyone's demand, Minister Nagesh stated.

He also said that many mistakes in the school syllabus have been rectified so far regarding historical facts and the exercise would continue in future.

However, the issue is likely to stir a controversy with various minority groups and individuals opposing it when the announcement was made earlier.

Minister Nagesh had earlier stated that as per the National Education Policy (NEP), on the lines of Gujarat state, Bhagavad Gita will be introduced in the state after consulting educational experts.

Karnataka Chief Minister Basavaraj Bommai had tated that it is the government's stand to include Bhagavad Gita, the holy scripture of Hindus, into the syllabus as a part of moral science subject.

Asked whether Bhagavad Gita would teach moral lessons, CM Bommai had angrily asked that if not for Bhagavad Gita, which other scripture can teach morals to children? In this competitive age, children need moral education, said CM Bommai and asked not to create unnecessary confusion in this regard. If Bhagavad Gita is made part of the syllabus, it will help children with Intelligence, he maintained.

In this country, all tall leaders, elders who have thought about the nation have talked highly about Bhagavad Gita, Minister Nagesh had stated.

Minister for Large and Medium Industries Murugesh Nirani had stated that Bhagavad Gita has human values and children need to learn about those values. The government of Gujarat has taken a decision to add Bhagavad Gita in the syllabus and a decision should be taken in Karnataka also to introduce Bhagavad Gita to children, he had said.

Senior Congress leader and former minister from Mysuru, Tanveer Sait had stirred up a controversy by stating that introducing Bhagavad Gita in the syllabus of school children is dangerous. "It is more dangerous than Covid pandemic," he stated.

Emotional matters are gaining importance in the country. The innocents are being misled. "There is an end to this trend and we will wait until then," he said.

Opposition leader Siddaramaiah stated, "We believe in Hindu religion and give equal respect to other religions. We do not have any objection to teaching Bhagavad Gita, Bible, Quran to children. But, children should be given quality education," he said.