United Nations, Oct 1 (IANS): India has abstained on a Security Council resolution condemning Moscow's annexation of parts of Ukraine while saying it was "deeply disturbed by the recent turn of developments" there.

The resolution, which sought to declare as illegal the referendum Moscow said it held in those areas to annex them, was vetoed by Permanent Member Russia, although it received 10 votes with four abstentions in the 15-member Council on Friday.

India's abstention came a fortnight after Prime Minister Narendra Modi had emphatically spoken to Russia's President Vladimir Putin against the invasion and External Affairs Minister told the General Assembly last week that New Delhi was on "the side that respects the UN Charter and its founding principles". 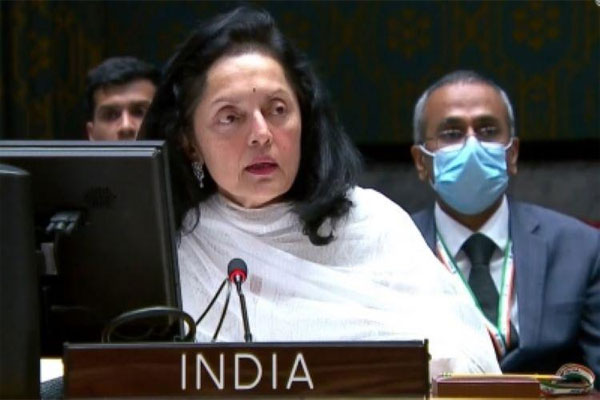 While explaining the abstention, India's Permanent Representative Ruchira Kamboj told the Council, "India is deeply disturbed by the recent turn of developments in Ukraine. We have always advocated that no solution can ever be arrived at the cost of human lives."

"India's Prime Minister has also emphasised that this cannot be an era of war," she added highlighting his public statement to Putin in Samarkand in September, which has been welcomed by Washington and interpreted as a shift from India's presumed neutrality.

This was at least the ninth time India had abstained on a substantive resolution on Ukraine at the UN.

US Permanent Representative Linda Thomas-Greenfield did not attach much weight to the abstentions by India, along with China, Brazil and Gabon.

Speaking to reporters outside the Council chamber after the vote, she said, "Their abstentions clearly were not a defence of Russia. They were not in support of Russia and they made clear their condemnation of Russia."

Kamboj said, "India's position has been clear and consistent from the very beginning of this conflict: The global order is anchored on the principles of the UN Charter, international law and respect for sovereignty and the territorial integrity of all states."

Calling for an immediate end to the conflict, she said, "Dialogue is the only answer to settling differences and disputes, however daunting that may appear at this moment."

Prime Minister Modi has unequivocally said this to both Putin and Ukraine's President Volodymyr Zelensky, she added.

The Council took up the resolution hours after Putin held a ceremony at the Kremlin to formalise the annexation and declared that the territories were now part of Russia and Moscow would defend them.

The seized territories together cover "more than 90,000 square km", which UK's Permanent Representative Barbara Woodward said, "is the largest forcible annexation of territory since the Second World War".

The referendum came after Russia faced military setbacks and retreated from some of the territories it had invaded.

The vetoed resolution introduced by Albania and the US called the "so-called referendums" held by Russia in the four Ukraine regions, Luhansk, Donetsk, Kherson, and Zaporizhzhya, "illegal" and said they were an attempt to change Ukraine's internationally recognised borders.

The issue will now go before the General Assembly either through a similar resolution or by a new procedure adopted by it to require permanent members to explain their vetoes.

Thomas-Greenfield said before the vote that if Russia vetoed the resolution she would take it to the Assembly, where there are no vetoes, to "send an unmistakable message to Moscow".

Although the Assembly has no enforcement powers, large support for the resolution would give it moral authority and show Moscow's isolation.

Thomas-Greenfield said that "sham referenda" were held under "the barrel of Russian guns" and the outcome was "pre-determined in Moscow".

"Time and time again we have seen the Ukrainian people fight for their country and their democracy," she added.

Russia's Permanent Representative Vasily Nebenzya dismissed the resolution as a tactic to provoke a veto.

He asserted that the people of the four regions have spoken and "there will be no turning back, as today's draft resolution would try to impose".

Later at the request of Moscow, the Council took up the sabotage of the Nord Stream pipeline that carries Russian gas to Germany.

After UN Assistant Secretary-General Navid Hanif said that while the organisation could not confirm any of the reports about the causes of the four leaks in the undersea pipeline, the discussions descended into the US and Russia trading charges.

Nebenzya alleged that the "Anglo-Saxons" - an imprecise reference to the multi-ethnic US - had sabotaged the pipeline and American natural gas companies would be "celebrating" increased opportunities in Europe.

He said that "sabotage of critical infrastructure should be of concern to us all" and pointed out that there have been "numerous Russian attacks damaging civilian infrastructure" in Ukraine.

Hanif said that the damages to the Nord Stream pipelines had two major impacts, on the environment and on the energy supply.

"Hundreds of thousands of tonnes of methane emissions" would result from the broken pipeline and it "can exacerbate the high price volatility on the energy markets in Europe and around the world", he said.