Etawah (UP), Oct 2 (IANS): The historic and iconic 'Gandhi Banyan Tree' (Gandhi Vatvriksha) that was said to be more than 300 years old, had fallen during torrential rains on September 22.

The spot where the tree stood will have a replacement which will be planted on Sunday on the occasion of Gandhi Jayanti.

The tree came to be known as 'Gandhi Vatvriksha' because during the freedom movement, it was a meeting place for Gandhians. 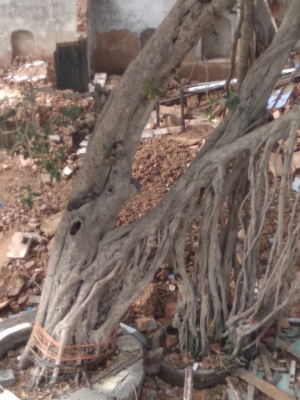 Locals say that many freedom fighters in the district were tied to the tree and beaten by the British. Some were even hanged from the tree.

Prabhat Mishra, a government official posted in Agra who runs the 'Red Tape Movement' for forestation and tree protection, said that the administration assured the local people that a new banyan sapling would be planted at the same spot on the occasion of Gandhi Jayanti, the birth anniversary of Mahatma Gandhi.

However, local environmentalists, who are emotionally attached to the old, iconic tree, decided to cut twigs from the fallen banyan tree in an attempt to grow saplings from it.

The saplings from the old tree would be planted in Etawah, Firozabad, Mainpuri, and Agra, said Prabhat Mishra.